Soludo to FG: Try Nnamdi Kanu Expeditiously or Release Him 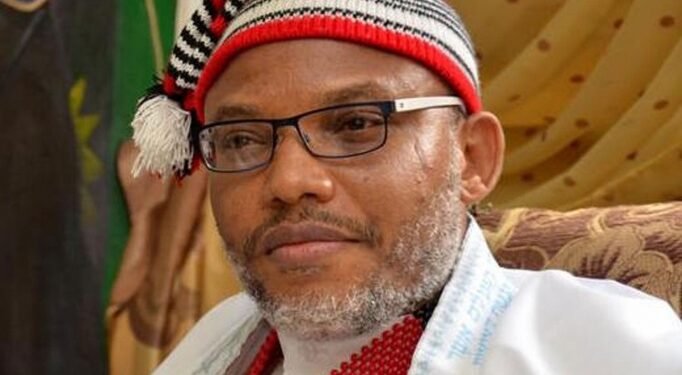 The Governor of Anambra State, Chukwuma Soludo, has given the assurance that he will lead his fellow governors in the Southeast to engage the federal government in dialogue to handle the security situation in the zone.

Mr Soludo said that an expeditious release of Nnamdi Kanu, the leader of the proscribed Indigenous People of Biafra (IPOB), would cushion the insecurity impasse in the zone.

Mr Soludo said this during a one-day Peacebuilding and Security Dialogue, held in Awka on Saturday. The event was held in response to the deteriorating security challenges in the region.

He endorsed the communique of a joint body of traditional rulers and clergy to declare Monday, April 4, as a Day of Prayer at all churches and places of prayers for forgiveness and reconciliation.

He said Mr Kanu should be tried expeditiously, according to the law, and be convicted or freed instead of being kept under indefinite detention.

The governor pointed out that justice delayed is justice denied.

He said the state government would open rehabilitation centres for those who dropped their arms and set up a truth and reconciliation panel to investigate and placate those who lost their lives and property in the course of the violence.

Mr Soludo said he is ready for total engagement with all parties, including the aggrieved, in the quest for peace.

He called on all genuine agitators to drop their arms and leave the forest while warning criminal elements taking advantage of the situation to hold the people to withdraw or face the full force of the law.

“We will engage with the good, the bad and the ugly. We will not discriminate against anybody.

“We need more engagement than force in solving the problems, we need peace and security in our land to make progress, we can’t continue to cut our nose to spite our face.

“All churches should announce the Monday prayers,” saying “they will also signal the end of Monday sit-at-home order that had lingered for months,” he said.

In their 8-point Communique, the body of traditional rulers and clergy in the South-east called on the federal government to free Mr Kanu unconditionally to douse the tension in the region.

The communique, which was read by Alfred Achebe, the Obi of Onitsha, condemned the Monday sit-at-home directive which started on August 9 last year, describing it as self-destructive and inimical to the progress of the region.

The joint body regretted that even when the IPOB, under the leadership of Nnamdi Kanu, had withdrawn the order since August 24, killings, abductions and burning of property have not stopped.

Mr Achebe said that they have proposed meetings with the presidency on the problem of the South-east but had not received a response from the federal government.

He said the agitation was caused by perceived injustice against the South-east and that only a constructive engagement would address the problems which were further hurting the people.

The body called on all injured, aggrieved and victims of the insecurity in the South-east in the last three years to embrace the Truth and Reconciliation Commission of the Anambra government.

According to the body, “we recognise that there is country-wide agitation for restructuring of inter-ethnic and inter-governmental relations in Nigeria, with a view to greater inclusiveness.

“We, therefore, share the genuine concern over the political and economic marginalisation of the South-east Geo-Political Zone of Nigeria, a major plank of the agitation by the IPOB.

“We call for constructive and continuous dialogue by all parties as a more sustainable solution to overcoming the challenge and win the hearts and minds of the people.

“We join our voices to the call for the unconditional release of Mazi Nnamdi Kanu by the Federal Government in order to douse the current tensions across the Southeast.

“We call on all criminal elements masquerading as working under the instruction of IPOB or ESN to cease and desist from further acts of violence and criminality or face “theism” placeable force of law and order.

“We call on all who may have taken up arms in the belief that their grievances could be achieved only through armed struggle to lay down their arms.

“We declare Monday, April 4th, 2022, as a Day Of Prayer For Peace for Alaigbo (Igboland) and implore Anambra residents and all religious congregations to join in this important day of prayer at Cathedrals, Churches and prayer houses across the area by 11:00 am,” it said.

Going by the words of Labour Minister Senator Chris Ngige, only the National Industrial Court (NIC) can guide the Federal...