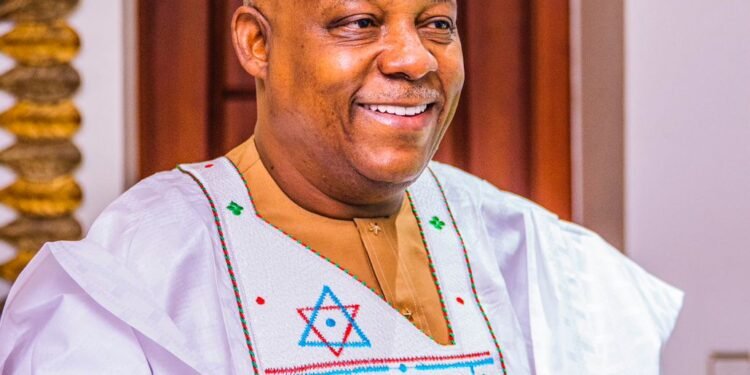 Senator Kashim Shettima, the vice presidential candidate for the APC, is a phenomenon when it comes to forming connections. His moves demonstrate the uniqueness of his inner personality and how quickly Shettima has advanced to the top of the game that he is traveling throughout the North, particularly in the Northwest where the PDP candidate, Atiku Abubakar, is hoping to maintain control. He has been unraveling the opposition’s calculations in the news stories that will dominate after the general elections in February, 2023.

The transition from Sarkin Fulani’s front steps in Alaba Rago to the Emir of Bauchi’s palace. Kashim Shettima has a conquest enchantment that sends shivers down the spine of the opposition in the run-up to the general elections. He shakes hands with important people from Birnin Gwari to Yauri and over the path and sections of political landscapes. The intention behind the inside smile and the narrowing, intense gaze is to anticipate success.

The crowds that met him as he arrived from the high and mighty doors to doors weren’t the normal parades of mediocres and the throngs of various creations from web animations. Politics is about organizing at the local level, and Kashim Shettima was visible all over the place working tirelessly to ensure the triumph of the All-Progressive Congress, APC. physically present, tangible, and feelable by the skeptic Thomas.

While it was overcast for some people in the path, it was clear from one palace to the next as courtiers sang merry songs in kings’ praises, and we were reminded of the Lawino melodies from the windows by the opposition’s doorposts. No other Vice-Presidential candidate has the level of ferocious support from the electorate as Kashim Shettima does in every area he touches while preparing for rallies across the northern iron gates.

At the palace of the Gbong Gwom Jos, His Royal Majesty Dar Buba Gyang, it was Kashim Shettima, the APC vice presidential candidate, who was speaking about Asiwaju Bola Ahemd Tinubu while the audience nodded in agreement. Jigawa experienced the similar situation as Kano, Katsina, Zamfara, Kebbi, Sokoto, and Bauchi.

A constant surprise has continued to astound them (oppositions) as political pendulum swings the APC’s directions of movement with the customary political roaring calling out Tinubu/Shettima as in the days of Caesar’s glorious outings in the Capitol as put in the renowned play by the great Shakespeare. In many places where the APC rolled its agenda for the new administration coming, the oppositions have been forced to go back to the drawing board to rework its strategy.

While the Atikus have yet to resolve their internal disputes and the Obis are killing themselves in the southeast, Tinubu and Kashim are taking advantage of these political advantages to construct bridges that would take Nigerians to the land of glory on the wings of hope. Kashim Shettima encounters political war houses in the north and smiles and moves with color. His outing was not planned with the intention of marketing a candidate. That was completed a long time ago. Shettima is currently working to revitalize the northern spirit, which is where politics has its origins.

The APC Vice Presidential Candidate was opening doors of opportunity, revitalizing and recapitalizing the old relationships, making the lost hope pure and new, and returning to the people the hope of a New Nigeria that the Tinubu administration will bring to the forefront with each step he took on this political conquest grounds. While it is true that the Tinubu, Shettima campaign train is tearing down opposing obstacles, the campaign team has kept its attention on the victories already won as it sails toward the next conquest.

The populace sees new hope for Nigeria from the palaces to the farmers. Shettima’s statements regarding Nigerians’ expectations and how they want to be led in the upcoming political system are profound and true. From Jigawa to Bauchi, the only people who know the path have led the way with a crowd and a cloud of devoted followers, making each day brighter. The Tinubu and Kashim Shettima team has been one that has placed more attention on the journey home than any other observation so far on the ongoing Campaigns everywhere, and this was no longer breaking news.

The All Progressive Congress Vice Presidential Candidate Senator Kashim Shettima has been on the political platform for those looking to get the necessary adjustments before the February 2023 election to make the right decision given today for their tomorrow. If the north faces daily struggles to get a fresh one of the best ways of educating the people about the election, Shettima stands as both a teacher and a guide.

It is widely known that no presidential candidate or vice presidential candidate has ever been physically strong and able to travel the entire breadth of the north to interact directly with the people, as Tinubu and Kashim Shettima did. This is proof positive that the APC candidates worked diligently and seriously to get ready for the day’s test far in advance. The people who deserve credit should receive it.

James Bwala, is a seasoned journalist based in Abuja