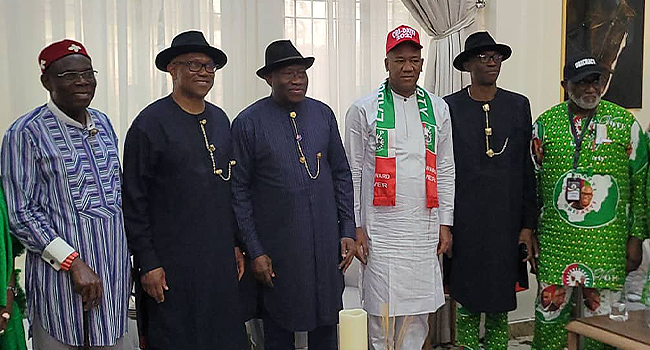 The Presidential candidate of the Labour Party, Mr. Peter Obi, took his national campaign tour to Bayelsa state on Friday declaring to Niger Delta people that Nigeria has been unfair to them.

He, however, made a concrete promise that if elected President on February 25, 2023, he will use oil money to rebuild the region.

“Going round the entire Niger Delta and Bayelsa state in particularly, I stand here to say that Nigeria has not been fair to the Niger Delta region”

On the increasing case of crude oil theft in the region, the LP Presidential flag bearer said, “The oil theft in the Niger Delta is done by government people and their collaborators. Common people don’t own vessels, you don’t put oil in your pocket. But all these things will stop when you put the right people, people with competence and commitment in government.

Obi, a former Anambra state Governor also spoke on the East/ West Road saying, “The East- West road was flagged of since 1970 by the Federal Government and after 52 years they can’t complete it. I am coming to rebuild Bayelsa and the entire Niger Delta.

He promised Nigerians that he and his vice presidential candidate, Datti Ahmed if elected will do everything to secure and protect Nigeria.

“Bayelsa state is a riverine area, Bayelsa including all the waters is about 10.7million square meters of land. Borno state is 70.9. So it is 7 times size of Bayelsa state. So is Niger state, which has more fertile land. But they depend on resources from Bayelsa state.

Obi said his Presidency will make states contribute to the federal purse, because when they contribute we can make more money for the Nigerian state than we make from oil.

According to the LP candidate in a way of illustration, “Land in Niger state is more than the land in Belgium and Netherlands combined. These two countries last year exported agricultural products that is over 10 billion dollars. Niger state can’t feed itself, it can’t export anything. If they will only do they have zero percent of what these two countries did. They will earn 15 billion dollars. And that is more than the money they would have gotten from oil.

“The same in Borno state and so many other states in the North. But they are not doing anything, they are waiting to share from the oil. In Taraba, you can grow flower, coffee and tea. Kenya grows over half a bilion from flower. Ethiopia did over a billion from coffee. Taraba is waiting to share money from Bayelsa.

“The Federal Government does not know that by cleaning the waters of Bayelsa, putting money in infrastructure in Bayelsa, we can get money out of them, because we would have been making money out of oil and from fish. It is a win-win. We want to change the country. We want to make it productive.

Obi reiterated his earlier statement since the campaign that, “This election shouldn’t be by turn. It is nobody’s turn. It is the turn of Nigerians to take back our country. If anybody wants to talk about turn, I have the right to talk about turn, but I am not running on turn. I am an Igbo man. I am proud to be an Igbo man but am in this race as a Nigerian carrying a pan Nigeria ticket.

Obi Replies Tinubu: Nigeria’s Money Safer with a ‘Stingy’ Man Than with a ‘Thief’

The NAHCON Intervention in Nigeria’s Diplomatic Profiling – a travelogue, By Tunde Akanni