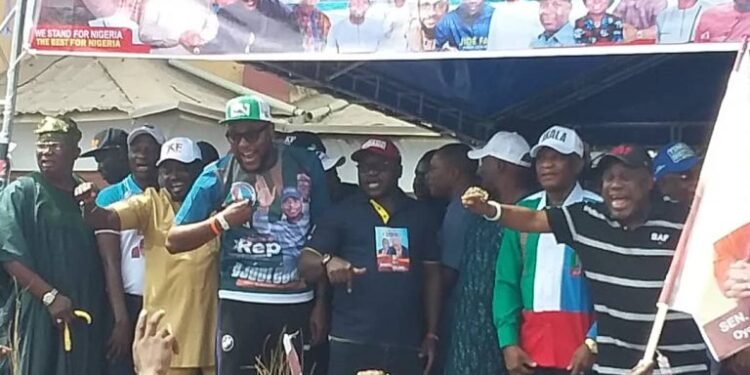 •From left: Olamiju Alao-Akala; Sen.Teslim Folarin; Sen. Fatai Buhari and other APC candidates in Oyo State, addressing the party supporters at a rally in Ogbomoso.

The All Progressives Congress (APC) in Oyo State is determined to wrestle power from the ruling Peoples Democratic Party (PDP) in the state comes 2023 general elections.

Sen. Teslim Folarin, the party’s Governorship candidate and Sen. Fatai Buhari, candidate for Oyo North Senatorial District, made the assertions on Wednesday at a rally in Ogbomoso.

The rally was to canvass votes for the party’s Presidential candidate, Bola Tinubu and other candidates of the party in the state.

Folarin said that Ogbomoso was a save zone for APC, being the zone of a former Governor, late Chief Adebayo Alao-Akala and also, a stronghold of the party.

The candidate said he was optimistic that all the party’s candidates would win in Ogbomoso and the state during the 2023 general elections.

“But, we will not take any part of the state for granted and would continue to canvass for their votes.

Folarin said that PDP, as the ruling party in the state, has no experience in piloting the affairs of the state.

According to him, it has provided no meaningful development in the last three and half years of the administration in the state.

He said that all the APC candidates in the state were experienced and have what it take to pilot the affairs of the state to prosperity, if voted into power.

“APC is now more united and all the aggrieved leaders, including the former Deputy Governor, Moses Adeyemi, are at this rally, this is to show that the party is united and doing fantastically well to win the 2023 elections,” he said.

In his remarks, Buhari, who is contesting for Oyo North Senatorial District for the third time, said that the focus of all APC candidates was to develop and bring prosperity to the state and Nigeria in general.

He said that his senatorial district being an agricultural area, if well annexed, could feed not only the state, but the entire country.

Buhari said that he was supporting Tinubu, not based on ethnic or religion, but because of his competent capacity and character to deliver, which all APC candidates in the state also possessed.

He, therefore, called on the electorate to shine their eyes and vote for APC, which has competent and pedigree candidates that could deliver dividends of democracy to the masses.

In her remarks, Olawumi Oladeji, the APC candidate for Ogbomoso North for the state House of Assembly, called on the electorate to give her more opportunity to fight for the course of women and humanity in general.

Oladeji, who is running for the position for the third time, said it has not been easy being the only female in the state Assembly.

According to her, God has been helping me and I have sponsored many Bills on gender issues which has been passed.

She described women as indispensable and have role to play in the society, urging the electorate to vote for her and other APC candidates in the state.

Commenting, Olamiju Alao- Akala, the APC candidate for Ogbomoso North/South/Orire Federal Constituency, said as a youth, he was bringing on board inclusiveness and new way of governance.

Alao Akala said the chances of APC winning election in the state was bright, urging the voters to shun violence and collect their PVCs to cast their votes for APC’s electoral victory.