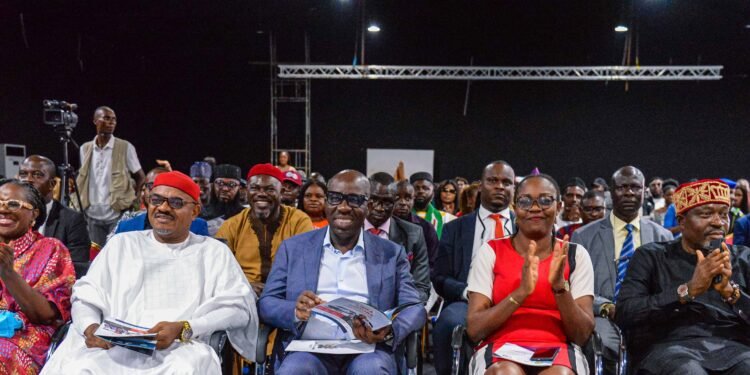 The Edo State Governor, Mr. Godwin Obaseki, has said his administration remains committed to harnessing the huge potential locked in the state’s creative industry, noting that the government will partner with the Actors’ Guild of Nigeria (AGN) on the realization of the Edo Film Village.

Obaseki, while delivering the keynote address at the Nollywood Actors Summit 2022 with the theme, “Impact of digital technology on the acting profession,” said the government will work with the actors to develop a new curriculum for use in junior secondary schools to launch students into the creative industry.

The summit holding at the Victor Uwaifo Creative Hub, in Benin City, between Monday, November 21, 2022 and Wednesday, November 23, 2023.

Some of the notable Nollywood stars at the summit include Joke Silver, Kanayo O. Kanayo, Destiny Etiko, Lancelot Oduwa Imaseun, Nobert Young and Eucharia Anunobi, among others.

Obaseki said, “I want to be remembered as a governor who changed the face of education in Edo State. We are paying critical attention to investing in people as they make things happen.

“My message to AGN is to let you know that the people are the greatest asset you can invest in, especially young people. The Edo State Government will like to collaborate with you in the transformation of our educational system.

“Our Ministry of Education will meet with the AGN to see how we can begin to work with your group to finetune our curriculum at the junior school level to support those children who are interested in the creative industry.”

On the Edo Film Village, the governor said, “We would like to move to a stage where we would enter a partnership with the AGN so that you can support us as we finalise the designs and all the studies required to enable us attract the investment into what I can promise you to be first of its kind, a world-class film village in Nigeria.

“We are at the final phase of completing the design of our film village. It’s a 30-hectare piece of property. Just like other government offices, this facility will be connected with our independent power plant to be supplied 24/7 electricity.”

Speaking on the design of the Benin Cultural Center, Obaseki noted, “It will include three museums, a lot of spaces for actors and the creatives, a pavilion (storage facility for priced works) and research facilities.

“We have decided to provide incentives for actors who have decided to produce their films here in Edo State in the areas of accommodation, location, security and other logistics which will result in a cheaper rate for you. It will help you produce masterpieces.”

The President of AGN, Ejezie Emeka Rollas, said, “I commend Governor Obaseki for this standard creative hub. You have proven that culture and tourism is one of the major cardinal areas in your reform agenda and it will surely fast track the socio-economic development of the state and also complement the fascinating tourist attractions in the state.”

Dateline: November 11, 2022 AUTHORITIES in the New Christiandom have been busy getting their members to ascribe less powers...

We Have No Plans to Demolish NUJ Building, Says Edo Govt

2023: Many Mistakes of Atiku Abubakar — opinion by Tony Okonigene

Ekiti: I Completed all Abandoned Projects Inherited from my Predecessor – Fayemi