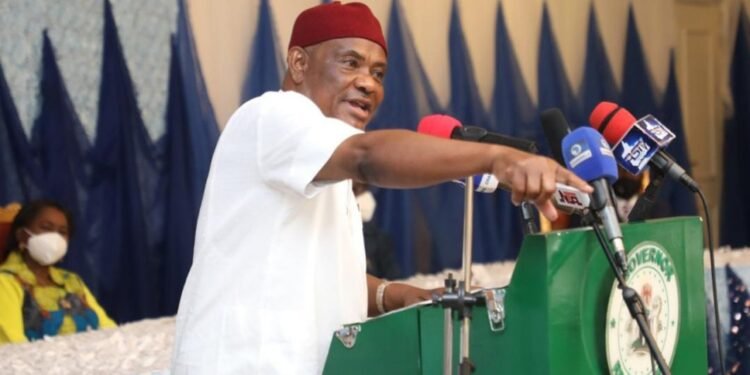 “Let him deny it, I will give more information. That money did not go into PDP account but into the private account of Ayu, let Ortom, Fintiri, Ikpeazu, Makinde tell Nigerians it is not correct”. – Nyesom Wike.

The National Chairman of People’s Democratic Party (PDP), Dr. Iyorchia Ayu, allegedly received N1 billion from a presidential aspirant before the last convention of the party in May this year, Rivers State Governor, Nyesom made the allegation in Port Harcourt.

Wike said the deal that led to the money being given to the chairman was sealed in Lagos.

The governor therefore challenged Ayu to come out clean to deny the allegation.

Wike, who was addressing journalists in Port Harcourt, River State said the N1 billion he collected did not go into the account of the party but into his (Ayu) private pocket.

He alleged that the presidential aspirant told Ayu that he was not sure that the governors would agree to sponsor the party for the election hence he was giving him the money. “I know how the money was  arranged in Lagos”, he added.

He said a governor confirmed in London that Ayu collected the N1 billion from a presidential aspirant in Lagos.

“Let him deny it, I will give more information. That money did not go into PDP account but into the private account of Ayu, let Ortom, Fintiri, Ikpeazu, Makinde tell Nigerians it is not correct”, he said.

He said the chairmanship must be zoned to the south, so that the party can win.

He said party NEC can take the decision and ratify it after the election at a convention.

Atiku  said it is a constitutional issue, and he did not call us how to work on the constitution.

But the constitution said, we must zone to the South and now you are bringing out constitutional issue”.

He said Ayu consistently worked against him before, during and after the PDP convention.

He said that Ayu was so serious in working against him that he called Presidential aspirants before the PDP primaries, begging them to step down, threatening that he will leave the party if Governor Nyesom Wike wins the  primaries.

He said he was disappointed that it is the same Ayu who was on his phone everyday prior to the convention where he emerged as Chairman begging him that he will work to unite the party so that PDP can win election.

He said a party that wants to win election will not be too arrogant and not humble  enough to give in order for the party to succeed.

He said his camp is insisting on South chairmanship of the party for inclusiveness and so that PDP can win the presidential election.

He said he will not leave PDP but that it will be in the party. But that ignoring Rivers State, Kano State, and Lagos will be at the peril of the party.