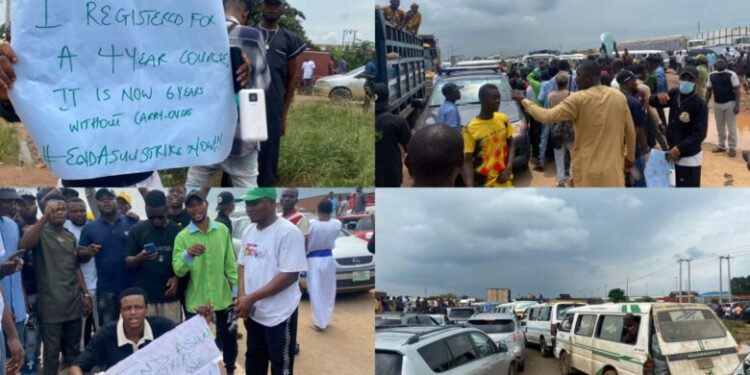 Fashola noted that the Nigerian constitution recognises and protects citizens’ right to public protests but does not empower any Nigerian to “inflict pain and inconvenience on other people.”

The Federal Government, on Wednesday, described as illegal a protest staged by members of the National Association of Nigerian Students (NANS) on Tuesday which resulted in a gridlock on the Lagos-Ibadan expressway.

The protest took place just after the Sagamu Interchange section of the expressway, inwards Lagos.

Students carrying placards and chanting solidarity songs as they lamented seven-month strike of the Academic Staff Union of Universities.

They vowed to lay siege of the major highway and others to drive home their demand to end the strike.

The Minister of Works and Housing, Babatunde Fashola, stated this while responding to questions from State House Correspondents after this Federal Executive Council meeting presided over by the President Muhammadu Buhari, at the Presidential Villa, Abuja.

Fashola noted that the Nigerian constitution recognises and protects citizens’ right to public protests but does not empower any Nigerian to “inflict pain and inconvenience on other people.”

While speaking on the recurrent gridlock on the uncompleted sections of the highway, Fashola appealed for more patience from Nigerians saying that there is no alternative route in the already built-up areas.

He said “Once again, I apologise and empathise with commuters who need that place to get on with their lives. It’s the place we left to the last really because it’s the most built-up area, the last six kilometers into Lagos; very densely populated and occupied. There’s very little room for alternative routes for people. So, you just have to bear with us.

“I also heard that some aggrieved students under the aegis of NANS are going to the road to protest. My respectful view is that is not helpful at all to the citizens.

“The right to protest is a very well-protected right in our Constitution, but it does not include the right to inflict pain and inconvenience on other people. And so, whilst the protests can go on, they should refrain from blocking the road in order to do their protests. That in itself is a violation of law.”

Meanwhile, the Minister of State for Petroleum Resources, Timipre Sylva, has assured that the Old Port Harcourt Refinery would become functional by December this year.

Sylva also said the development of the Compressed Natural Gas (CNG) is still in progress.

The Minister, who was responding to a question on the state of the ongoing repairs at the nation’s refineries, said one of the two refineries, the old one with 60,000 barrels-per-day capacity, would be functional by the end of 2022, just as works are also progressing on both the Warri and Kaduna refineries.

“The rehabilitation of the refineries is ongoing. As we said earlier, the old refinery in Port Harcourt, which is about 60,000 barrels per day capacity, will be functional by December and, of course, we still have some time in the contracting time to conclude the rest of the Port Harcourt Refineries.

“Works in the Kaduna and Warri refineries are also in progressing very well. We will soon be embarking on an inspection visit and some of you journalists will be will be able to go with us to ascertain for yourselves what the extent of work is”, he said.

On the country’s CNG development programme, the Minister disclosed that progress is being made, adding that it is one of the steps that must be achieved before the removal of petrol subsidy.

“On the CNG development, it’s very much in progress. That is part of the promises we made, part of the things we want to put in place before the removal of subsidy. Subsidy has still not been removed because some of these conditions that were agreed upon have not been met and we’re definitely working assiduously to ensure that all the facilities are in place, the pumping stations and the conversion kits.

By Sam Kayode Ndume passes vote of no confidence on the federal government for giving half salaries to lecturers of...