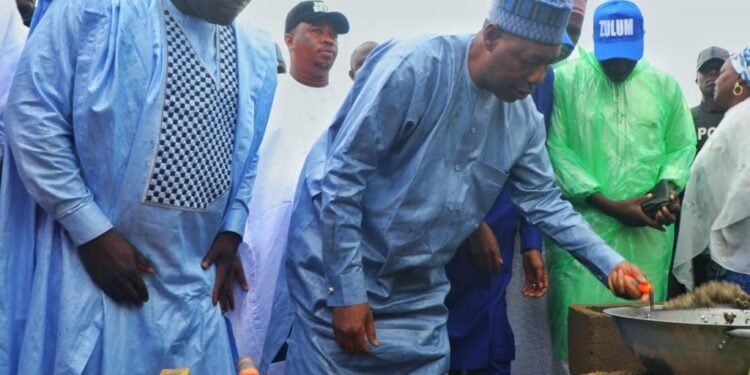 Kwaya-Kusar town is headquarters of Kwaya-Kusar Local Government Area, located in southern Borno, and Zulum drove there from Biu where he had spent three days since Tuesday, commissioning projects.

The college in Kwaya-Kusar was to meet the request made by community members for which Zulum in November 2021, promised to address.

The Higher Islamic College, which will integrate Islamic and Western Education, is to admit students with vast Qur’anic knowledge from traditional Islamiyas to study and earn diplomas, after which they can qualify for admission into universities and other tertiary schools for graduate programmes.

Commissioner for Education, Engr. Lawan Abba Wakilbe said the college will have three blocks each with 16 classrooms, to produce a total of 48 classrooms with a capacity for about 2,000 students.

He added that the college will have an administrative block, and two units of two-bedroom flats as initial staff quarters. There will also be six wash facilities.

Zulum arrived Kwaya-Kusar in company of Borno’s Chairman of the APC, Ali Bukar Dalori, Deputy Speaker of the State’s Assembly, Engr. Abdullahi Musa Askira, a candidate of the APC for House of Representatives, Engr. Bukar Talba, some Commissioners, Advisers, Assistants and Party Chieftains.

Zulum was in Biu from Tuesday to Friday.

The Governor drove from Maiduguri through Buratai to Biu.

While passing through Buratai, Zulum commissioned a mega secondary school for 1,500 students, and approved the employment of 20 additional teachers from the host community.

In Biu town, the Governor commissioned a 60-classroom community school for higher Islamic studies, which was built and donated by the State Government.

He also distributed N100m grants to 1,000 unemployed youths, and laid foundation for N2bn worth of vocational training centre with multiple workshops.

Zulum, still during the three days, ordered the construction of 200 houses in Miringa, and was also in Miringa to open a medical centre that was donated to the community by an oil company since 2020 but not put to use.

•Terrorists fleeing from their hideouts... •Another war asset degraded   By METROWATCH Reporter   It's no longer news that the...