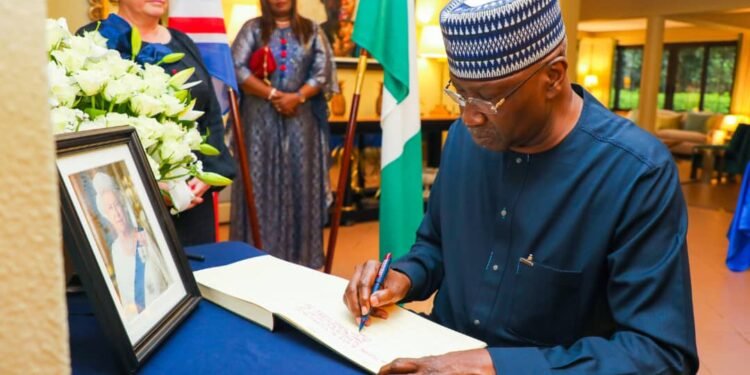 •The Secretary to the Government of the Federation, Boss Mustapha, representative of President Muhammadu Buhari, paid a condolence visit to the British High Commissioner to Nigeria, Catriona Laing, following the death of the British Monarch, Queen Elizabeth II, on Saturday, 10th September 2022 in Abuja.

President Muhammadu Buhari, represented by the Secretary to the Government of the Federation, Boss Mustapha, Saturday, paid a condolence visit to the British High Commissioner to Nigeria, Catriona Laing, following the death of the British Monarch, Queen Elizabeth II, in Abuja.

Speaking at the occasion, the President said the government and people of Nigeria have fun memories of the Queen having visited the country twice, first at her young change three years after her ascension to the throne, and her coronation in 1953, and spent a period of about 20 days in Nigeria visiting different cities.

According to the SGF, who spoke on behalf of the President, the second time was during the tenure of President Olusegun Obasanjo, Commonwealth Heads of Government Meeting (CHOGM), in 2003.

He said: “On behalf of the President and government of the Federal Republic of Nigeria, the President has personally asked me to come and convey his condolences, (he has already done that officially), to sign the condolence register on behalf of the government and the people of Nigeria, at this very difficult grieving moment, of the immediate family of Her Majesty the Queen the occasion of this very sad event of her passing away.

He said the mutual bond friendship, of camaraderie, of togetherness between Nigeria and Britain, since it became a protectorate of the British in 1901, have continued to make both countries succeed.

“The Queen was not only a monarch to us in Nigeria, she represented several things, having visited this country two times, one when three years after her ascension to the throne, and her coronation she visited in 1953, spent a period of about 20 days in Nigeria visiting different cities.

“Most of those cities still remember her in our youthful days. Then she came visiting again, when President Obasanjo invited her, I think it was for CHOGM, in 2003. Her resident then I think, was Aguda House.

“So I believe that as a result of the fact that 90 percent of Nigerians do not know of any monarchy, sovereign in the UK, but Queen Elizabeth II, that also goes for even the people of the United Kingdom 90 percent of the youth population, because of the long time that she had reigned.

“So on this occasion, like I said, I came on behalf of the President to extend the deepest condolences of the people of Nigeria. And the loss is not only to the people of the UK, to the Commonwealth, but for us in Nigeria, particularly because for a period of three years, she was our head of state after independence.

“In 1960-1963, before we became a republic, the Queen was the head of state. We had a governor general, it was after she vacated being the head of state that our then Governor General, Dr. Nnamdi Azikiwe, of blessed memory became our first president.

“So there is this mutual ties that have existed between Nigeria, since Nigeria became a protectorate of the British in 1901. And that mutual bond of friendship, of camaraderie, of togetherness that we have experienced, continues to succeed.

“I can assure you that the Nigerian government is in the state of mourning, and the people of Nigeria are mourning like other members of the Commonwealth.

So on this occasion, please do extend our deepest sympathies and condolences to the immediate family of the new king now King Charles III, and the people of Great Britain.“

In her response, Laing, recalled how fun she was of Nigeria before she presented her credentials to represent her here as her High Commissioner, in Nigeria.

According to the Envoy, “She spoke of those two visits to Nigeria that were mentioned and how much she enjoyed traveling around the country.

She followed Nigeria with with great interest and I think that foundation of that strong passion of the Queen for Nigeria, for Africa and for the Commonwealth is part of the foundation for why our relationships UK, Nigeria is so strong.
“Looking forward, as you say we now have King Charles III, and I’m very happy to say I’m very hopeful that the relationship between Nigeria will continue to grow and strengthen.

“President Buhari visited the then Prince of Wales now King Charles III in one of his residences in Scotland, Dumfries House a few years ago in 2020, to discuss their mutual commitment and passion around climate change, environments and so on. So they have a lot in common.

“I’m very hopeful that relationship between the two heads of state will enable us to continue the deepening and strengthening of the UK Nigerian relationship.“

By Eniola Oladele The Premier League, on Friday postponed its weekend fixtures, following the death of Queen Elizabeth, the English...

Is Buhari a Reluctant Political Godfather?

Take This to the Bank! I Made 2nd Best Result Nationally in 1976 – Okowa speaks on his missing school certificate