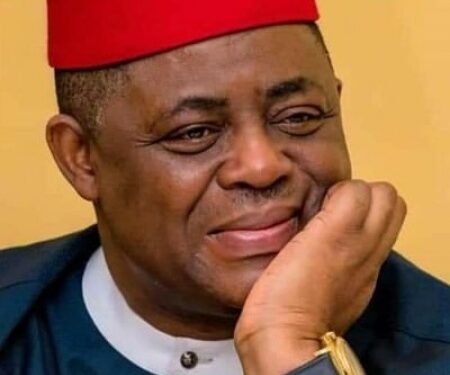 “For about a dozen of them in the strategy sessions, it’s the same theme but different angles: demonise Obi and demonise Ndigbo. As topics were shared out, huge sums were also disbursed, lubricants for perverse minds!” – Steve Osuji

They are not exactly pen for hire, they are consort journalists. Well kept and used by their master for his purposes. They have no qualms, they have little compunction, they are well fed, they feed the public with lies and fallacies, keeping a straight, evil, face.

Here’s a list: Sam Omatseye, Segun Ayobolu, Dele Momodu, Dele Alake, Bayo Onanuga, and now, the much troubled Femi Fani-Kayode. Some of these men and a few anonymous others, are the media running dogs of Asiwaju Bola Ahmed Tinubu. They also pride themselves as Asiwaju’s strategists and thinkers. (More on this later.)

Rising from their meetings a couple of months ago, all they could think up was a scheme to cutdown and rundown the Labour Party candidate, PETER “Prometheus” OBI, the titan the gods have elected to REWIRE Nigeria.

For about a dozen of them in the strategy sessions, it’s the same theme but different angles: demonise Obi and demonise Ndigbo. As topics were shared out, huge sums were also disbursed, lubricants for perverse minds!

Omatseye broke the ice with “Obi-tuary,” early August. He tried to make minced meat of Obi and the entire Ndigbo nation, seeking to dress them in the balaclava of IPoB. A mendacious genius, he kick-started the kill-Obi and Ndigbo project, but he received sobering backlash.

About a week after, another lackey, Segun Ayobolu weighed in with “The Igbo, Peter Obi and 2023.” Unlike Omatseye’s piece, this is a stark and unimaginative drivel that undisguisedly profiles Ndigbo. To think that I was on the Editorial Board with these fellows for about 10 years! And here he claims that Igbo are the problems of Lagos. A Kogi indigene, his Agatu great grand fathers were probably clad in leaves in the 20s and 30s when Sir Louis Odumegwu Ojukwu was investing in Apapa Wharf and old Ikoyi. Setting up ACB bank branches in Lagos to the point of becoming the first president of the Lagos Stock Exchange. After a century of living peaceful and helping to develop Lagos what Igbo get in 2022 is cheap ethnic profiling. Sam and Segun were colleagues and their cuts were the deepest!

Others who have weighed in include Dele Momodu (Why Peter Obi might not win); Bayo Onanuga, (Obi Social Media Creation); Dele Alake, (Obi no match for Tinubu); etc.

Two days ago, it was the turn FFK to ventilate. Master of bombast and blustery, he titles his piece: ” The Obidients, The Jagaban and the Icarus Syndrome,” it was verbose as usual, full of fury and angst.
As stated earlier, this group is neither smart nor strategic. In all their schemings, it is quite remarkable that they unwittingly managed to make Peter Obi the cause celebre of the election, and also the leading and biggest candidate.

FFK is a tragic and psychopathic figure. Hardly anyone takes him seriously anymore. A double-dealing liar, and a mealy-mouthed social critic, everything he does is a guffaw from his stomach.
He is devoid of integrity nor character. He doesn’t give a hoot about these primary virtues. For a man whose grand father and great grandfathers were among the first England trained graduates; for a man who is a second generation Oxford graduate, FFK has turned out a mess. He has neither exhibited intelligence nor wisdom and one can only wager he made poor grades in school.

READ ALSO  Could Wike be the End of Atiku’s 6th Run for President? By Fredrick Nwabufo

FFK is in a manner of speaking, a suicidally bipolar personality. He feeds off politics thus, he jumps from one ruling party to another. Before his last harakiri of shamelessly jumping back to APC, he was so broke and hungry he began a shuttle of Government Houses to beg for food. Some of the conditions given him was that he must return to APC.

How could he return to his vomit? A man who had said over his dead body would he join APC again; who had proclaimed that until Jesus returns he would never join APC.

He changes wives the way he changes parties. FFK is on his sixth marriage (officially) and he has done the rounds of PDP AND APC three times each. He must be quite dizzy now going back and forth. But it’s about chow. FFK is what Yoruba call alatenuje (long throat in street parlance) he follows the aroma of food up and down like a stray dog.

But how could you return to a party you recently described as a janjaweed gang and a “nest of vipers?”
How do you go back to a president you told the world was a corpse?
Hear FFK: ” Nigeria is running a corpsocracy: rulership of the living by the dead.”

It was actually FFK who initiated the propaganda about President Buhari being dead way back in 2017.
Hear him: “I did say the president was not back and I maintain that position. I have no apologies for saying so because the Buhari we are seeing today is not the Buhari that we knew and saw before.”
He described the president as a plague and an affliction.

It is also through FFK’s loud mouth and drug-impaired mind that we learnt that Asiwaju and Lai Mohammed go about with diapers. In fact he once challenged them to sue him so he could prove it. Yet, these people are his current meal ticket. Mark my word, should Obi win tomorrow, he would crawl his way to Labour Party and from there, abuse his today’s benefactor.

Bottom line is that FFK should never be taken seriously. Indeed, he should never be found in the company of decent people. But here we are, desperate Asiwaju ‘strategy’ team has co-opted him for the sole purpose of hacking down Obi. Some strategy! How does all this attempt to hack down Obi help the BAT candidate? Not a word about character and competence…

And that brings us to the issue of strategy and Asiwaju handlers. Since 1999, a coterie of fake, unintelligent fellows have surrounded and hijacked the goodly Asiwaju (yes, he’s utterly good natured. I have had pleasant encounters with him).

Apart from fleecing him, all they have managed to lead him to is the coming epiphany 2023. They are leading him to slaughter (erin yio joba!)

Unlike Awo and MKO, they couldn’t brand BAT as a statesman or imbue him with any societal force for good. While Awo was a natural: rigorous, intellectual and a social crusader, MKO was much like BAT, with all the human foibles and flaws.
But it took the men around him like Liad Tella, Nsikak Essien, Chike Akabogu, Doyin Aboaba, Lewis Obi, among others, to rebrand MKO as the quintessential philanthropist, Africa Pillar of Sports and champion of reparation for the evils of slave trade. Not his drug issue nor his CIA connections impaired his carefully created image of an African Statesman. When MKO eventually stepped up for presidency, it was an easy walk.

But BAT handlers have no vision nor much gumption. Like Awo and MKO, does BAT appeal to the people? No!
Is there a structure for authentic charity and philanthropy? No!

Is he known to champion any edifying cause for his people or humanity? No!
A simple BAT Foundation could have awarded 10,000 Lagosians foreign scholarships.

But zilch, they have been too greedy and selfish to elevate Asiwaju.
Awo wanted every Yoruba child educated. MKO wanted abundant life for all, creating so many businesses and giving thousands of people good jobs.
But till today, BAT is associated with grasping corruption for himself and family members at the expense of the people (all the markets, all the signages, senate positions, big contracts, choice property, revenues collection, etc, all in one family or his kitty to disburse).
He is associated with MC Oluomo and his motorpark gangs who make life excruciating for transporters and Lagosians.

The BAT brand is percieved as a mafia boss who doesn’t need the people…
Therefore, even in a general election, his so-called strategists see it as an entitlement; a right and privilege. Their childish mindset is: how dare anyone, especially an Obi challenge their Jagaban! This mentality explains why men who were supposed to be professionals are all writing the same articles with different titles about one candidate. In their folly, they forgot they belong to the ruling party and have incumbent president. They attack Peter Obi the way they attacked President Goodluck Jonathan those days!

Again, if BAT had smart strategists as against the leeches around him feeding fat on him, they would have convinced him it would he more honourable to present the Vice President, Professor Yemi Osinbajo or Works Minister, Babatunde Raji Fashola. How couldn’t they fathom that that was in BAT’S best interest?

You don’t need to be particularly smart to see that BAT’s condition is near-incapacitation. Now, he wants to serve only his personal interest by wearing the toga of PRESIDENT. Then what?
As it is, he doesn’t think about the best interest of the Yoruba nation nor the south of Nigeria not to mention Nigerian people…

Apparently, these foolish strategists are not perceptive enough to notice the equally foolish Fulani resurgimento in Nigeria. In the eight years of Buhari, they have remorselessly taken over Nigeria’s security architecture, the civil service and all the major nerve centres of the economy (NNPC, NPA, NIMASA, Customs, Immigration, name any critical sector, it’s controlled by the Fulani). They have already recolonised Nigeria by stealth. Another eight years of Fulani rule they would recolonise Nigeria by force of arms if we dare to resist. They are prepared to turn Nigeria to Afghanistan.
Of course, BAT and his handlers are too selfish to see this plot on our great country, Nigeria.

BOTTOMLINE: 2023 is Nigeria’s epiphany, our last chance to reclaim our country. Our motherland, Nigeria remains a great country, we only need to RECLAIM it from the BARBARIANS and begin to rebuild it for the good of all. It seems God has given Nigeria a last chance through OBIDATTI, we pray He would perfect His work, that he would travail evil agents like FFK so they shall not prevail. Amen.