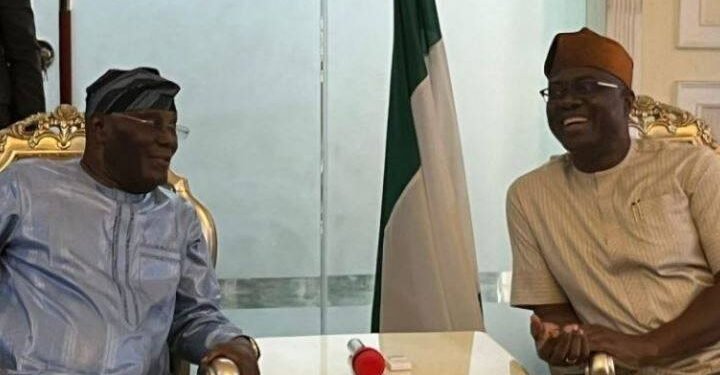 The governor made this in presence of the presidential candidate of the party, Alhaji Atiku Abubakar during his visit to Ibadan the state capital for the party’s southwest stakeholders meeting.

Governor Makinde said his call for Ayu’s resignation is based on the premise that the southern region should have a sense of inclusion in the political affairs of the party.

The Oyo State Governor, together with the Rivers State Governor, Nyesom Wike, has been tackling the PDP over the National Chairman of the party and the presidential candidate who are from the North.

However, in his welcome address, he described Atiku as “the incoming President of Nigeria in 2023.”

Makinde’s description of Atiku elicited loud applause from the PDP stakeholders at the venue of the meeting.

He said, “The truth is that we do not have any issue either with our party or our candidate. If there are challenges they must be tabled.

“But we are asking the National Chairman to step down so that the South will be fully included. That is the message.”

Governor Makinde had earlier said that the governors in the camp of Nyesom Wike, Rivers state governor, will continue to fight for their space in the PDP.

In fact, in his message to the national chairman of the party, Dr Iyorchia Ayu, Makinde noted that “Nigerians needed children who are ready to work and deliver”.

The governor made this assertion on Wednesday, September 7, during the commissioning of the Emohua campus of the Rivers State University where he was the special guest of honour, The Punch reported.

Performing the inauguration of the campus and flagging off of the staff quarters, Makinde made a veiled reference to the recent statement credited to Ayu, who said those calling for his resignation were still children when he and others were founding the party.

Governor Makinde said:“If children are doing all of these, I think what Nigeria needs are children. So, my brother Wike, you can be assured that Nigeria appreciates you.”

Oshiomhole: 23 APC Governors Working for Tinubu while Atiku Has only 8 with Him