Delta 2023: Kicking against Stone! – the plot by Omo-Agege and his houseboys – opinion by James Ekhator 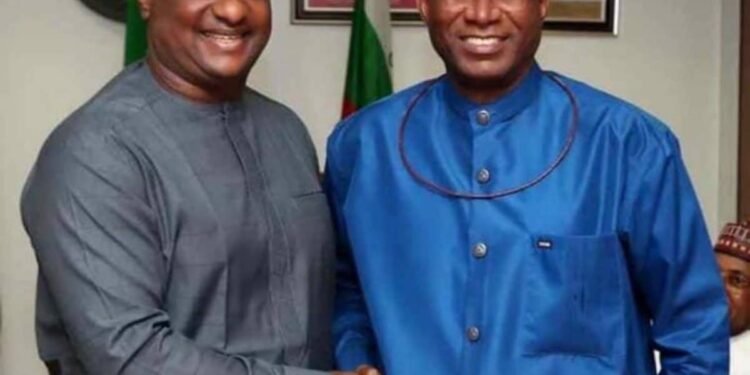 “Rather than swallow their pride and join Keyamo to be Omo-Agege’s house boys and house girls, many others like Chief Great Ogboru, Engr. Victor Ochei and many of the other leaders of the APC in Delta State have decided to stand against internal dictatorship. Some it is even gathered may be working for the PDP.”

Despite a fractious history of bellicosity shadowed with political rivalry, the duo of Senator Ovie Omo-Agege and and Mr Festus Keyamo sat down last weekend acting as if they had been besties these past years.

Festus Keyamo who had not too long ago vowed never to be Omo-Agege’s house boy was there seated quietly with other houseboys and house girls to, in their words, plot strategy against the dominion of the Peoples Democratic Party, PDP in Delta State. They came as it were, to kick against stone.

As he took all the positions he appointed his top aides as party chairmen at the state level and where not, those ones also appointed their cronies into the local government area executives making Omo-Agege the ultimate god father of the APC in Delta State.

Rather than swallow their pride and join Keyamo to be Omo-Agege’s house boys and house girls, many others like Chief Great Ogboru, Engr. Victor Ochei and many of the other leaders of the APC in Delta State have decided to stand against internal dictatorship. Some it is even gathered may be working for the PDP.

So, it was a thing of shock hearing Omo-Agege and Keyamo come together to in their words plot against the PDP in Delta.

“We need to be united to be able to confront the PDP. These are people who keep repeating the same thing and expect a different outcome.

“We are going to change the narrative in Delta. We are going to stand by Bola Tinubu for President. Selling him won’t be a difficult task. We saw what he did in Lagos,” he said.

Also, convener of the meeting and Spokesperson, APC Presidential Campaign Council, Festus Keyamo SAN, who had in the past vowed not to ever submit to the rules of Omo-Agege’s household was now the one arranging and keeping the household tidy for the Deputy Senate President.

His umbrage against a “a clueless and shortsighted administration” in Delta State could hardly find echo as many wondered if he himself was not short-sighted in his embrace of a man he had vowed never to worship.

Many are indeed not shocked after Keyamo disavowed his once believed revolutionary past of fighting against injustice. That disavowal came to fore after he claimed recently that he never took Asiwaju Bola Tinubu to court over the former governor’s lack of certificate.

He has now claimed that it was the Lagos State House of Assembly that he took to court. Of course one is not surprised given the somersault he has made on keeping Omo-Agege’s home tidy.

A statement issued by Ima Niboro, the media aide of the Omo-Agege Campaign Organisation reported that Keyamo said that the agenda of the PDP government in the state was to impoverish the people and make life difficult for them.

How this is so one may wonder given the fact that the Federal Government where Omo-Agege is a top officer has been credited with inflicting the greatest economic and security problems on the nation.

We are not unaware of the fact that many serving and defected APC members have blamed the Muhammadu Buhari government for the problems Nigeria is going through. Or has the Omo-Agege spokesman forgotten the words of the former APC chairman in Adamawa State who was sacked for saying the truth that Buhari has brought hardship on the country?

Keyamo went on to say that “the jacket of disunity is already in PDP. We will rescue the people from hunger and bondage”.

Yes, we may agree that we have some disagreement in the PDP but that is because we subjected ourselves to internal democracy unlike the situation in APC where Omo-Agege’s aides, houseboys and house girls dictated the procedure for all levels of primaries.

Ogboru, Ochei and many other respectable leaders of the party who could not stomach it decided to walk away, but Keyamo who was their leader in fighting Omo-Agege unfortunately decided to come back and take his position in the household.

Whether he is a houseboy, captain or whatever, we know he is in Omo-Agege’s household so long as he is unable to speak the truth to power.

The contention in Delta is that between light and darkness and the people of Delta with their religious liberty and tolerance are waiting for Omo-Agege, Keyamo and the other houseboys and house girls to come and market to them how they want Deltans to become canvassers of a Muslim-Muslim ticket. How?

The people of Delta are waiting for the houseboys and house girls to tell them to support a government which has taken Nigeria from the top where our PDP took it and brought it to the bottom. In Delta we are not senseless!

It is now obvious that some politicians in Nigeria prefer the gutter of infamy to the hallway of integrity and...

Riposte by Jackson Ekwugum — Ovie Omo-Agege and His Crass Vituperations

IPF Flays Marginalisation of Isoko in Appointment of Judges