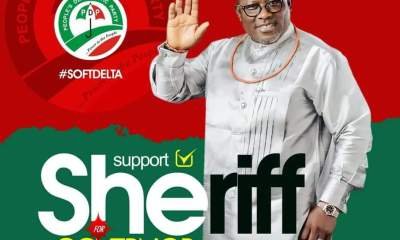 The Federal High Court in Warri has validated the primary election that produced Sheriff Oborevwori as the governorship candidate of the Peoples Democratic Party (PDP) ahead of the 2023 election.

In the judgement delivered by Okon Abang, on Friday, the court declared that the PDP’s primary election which was held on 25 May was validly conducted in line with the party’s constitution and election guidelines.

This is coming less than a month after another division of the court in Abuja sacked Mr Oborevwori as the party’s governorship candidate in the state.

The Abuja division’s decision was based on alleged inconsistencies in the names on the academic certificates Mr Oborevwori submitted to the Independent National Electoral Commission (INEC).

In the judgement delivered on July 7, the judge, Taiwo Taiwo, of the Abuja division, ordered that Mr Oborevwori be replaced with David Edevbie, a former Commissioner of Finance in the former Governor James Ibori administration, as the PDP’s Delta State governorship candidate.

But the Warri division of the court on Friday affirmed Mr Oborevwori as the validly elected governorship candidate of the PDP.

The court, in its judgement, dismissed the suit filed by a governorship aspirant on the PDP platform, Ike Aghwarianovwe, who alleged that the 25 May primary election won by Mr Oborevwori was marred by overvoting, among other breaches.

But according to Mr Abang, in Friday’s judgement, “there was no overvoting in the said primary election that produced the 2nd defendant (Mr Oborevwori) as the candidate of the 1st defendant (PDP) in the 2023 governorship election.

READ ALSO  Between Okowa and Ibori: Fallacies and Fiction

He affirmed that the PDP “complied with its Constitution and Electoral Guidelines 2022, the Electoral Act 2022, INEC’s Guidelines in conducting the primary elections on 25 May 2022 that produced the 2nd Defendant as a winner of the said election.”

He dismissed the plaintiff’s suit for lacking in merit.

He declared that Mr Oborevwori “was duly elected as winner of the 1st defendant’s gubernatorial primary elections conducted on 25 May 2022 having scored the highest number of lawful votes in the said primary election in accordance with the 1st Defendant’s (PDP’s) constitution and its Electoral Guidelines 2022.”

He also awarded the cost of N100,000 in favour of each of the nine defendants, including PDP, Mr Oborevwori, and INEC sued by the plaintiff.

He also urged the court to declare that the party “has no flag bearer for the 2023 gubernatorial election for Delta State”.

Background
The battle of who gets the PDP’s governorship ticket in the run-up to the 2023 governorship election in the state is an extension of the rivalry between the incumbent governor, Ifeanyi Okowa, and his predecessor and former political benefactor, James Ibori.

While Mr Okowa is backing Mr Oborevwori, who is the Speaker of the state House of Assembly, Mr Ibori is supporting a protégé, Mr Edevbie.

Mr Edevbie, who came second behind Mr Oborevwori in the 25 May primary election, served as the Commissioner of Finance in the Ibori administration.

Mr Ibori’s camp recorded a major victory when the Federal High Court in Abuja, in its 7 July judgement, sacked Oborevwori and replaced him with Mr Edevbie as the governorship candidate of PDP in the state.

The court upheld Mr Edevbie’s suit by disqualifying Mr Oborevwori and declaring him not eligible to participate in the primary election.

It held that the inconsistencies in the names on Mr Oborevwori’s certificates submitted to INEC in support of his candidacy amounted to supplying false information to the electoral body in violation of the Electoral Act.

Mr Oborevwori has since appealed against the judgement.

The Friday’s judgement delivered in Warri affirming his victory in the primary election introduces another knotty dimension to the disputes.

This may take the intervention of the Supreme Court to determine the valid holder of the PDP’s governorship ticket in the state.