OPINION By James Ekhator – Okowa Spoke Once, the OBIdients Get Daily Rattled 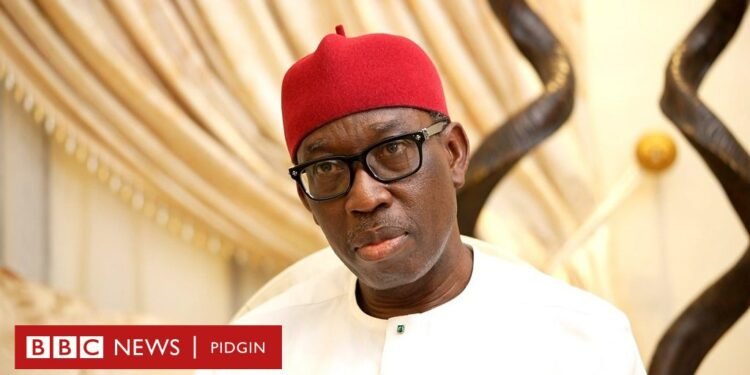 They are up and in their characteristic manner, up in ‘arms’ using all arsenals in their disposal trying to shoot down a part of Governor Ifeanyi Okowa’s harmless reference in his last BBC Pidgin English interview to a fellow contestant in next year’s presidential election, Mr. Peter Obi.

Okowa is governor of Delta State and vice-presidential candidate of People’s Democratic Party (PDP) in the February 2023 general election. But what did he say about Obi in that interview that has kept tongues wagging; some throwing invectives at the governor?
As urbane as he is in his approach to issues and polished in choice of words, when he was asked to comment on the chances of Obi and the Labour Party in the forthcoming election, he politely said: “I did not say he won’t have any votes; he will have. But what I’m saying is that he’s not a new candidate. It has not been long since he left PDP. You know he was in APGA before, from APGA he came to PDP. It hasn’t been long since he left (PDP) so he cannot say anything about PDP because that’s where he was before.
“Some of us are still here. At every party, there are good people and bad people. But today’s Nigeria is very troubled, and we need the right person. That is why I am appealing to our youths to be wise and vote well, they should not be blinded by the concept of a false change because that is how they raved on Jonathan in 2015.

“His (Obi) previous experience is not enough for this one (presidency). It will be hard. His experience is not deep enough. Even as a current governor ruling in a time of crisis, I know how hard it is. I even want to learn under Atiku because he has experience with the federal government.

“The thing is not easy. For them to have handled the economy at that time and made it something better, offering hope, creating jobs, and filtering the society, was not easy because it’s a bigger thing. So, someone is supposed to learn through that. If you look at Obi’s experience, you’ll know it’s small.”

So the vexatious aspect of Okowa’s answer is the submission that Obi does not possess a deep experience as state governor for the task of managing 36+1 states in Nigeria.

Like the rattle snake, they have been spewing all kinds of unthinkable conjectures to coal-tar the governor’s reputation.

Make no mistakes about it, Obi himself had had cause to denounce many of the so-called OBIdients, calling them his real opponents because of their abrasive attitude towards other contestants. He, like Okowa, will not hurt a fly and will also not be impolite relating to other persons.

So questioning Okowa’s credentials in the areas of governance, service delivery, democracy dividends’ delivery and his personal integrity in handling of political party affairs, among others by the OBIdients, ought to be no, no areas in saner societies; but they appear permissible in our society today because of the penchant of so many persons in our clime to delve into the realm of pull-him-down type of politics.

In spite of all that, Okowa, the VP candidate is unfazed and trudging on steadily with his eyes on the goal – Villa.

Questions have been raised on his Igbo lineage. Nothing can be far from the truth. Okowa is Igbo.

Ifeanyi Okowa is not posturing in Igbo red cap as some OBIdients have claimed. His name is Igbo. His dialect is Igbo – you call it Delta-Igbo, not a problem. All the same, he’s Igbo and has been received as such. Need it be restated for clarity that a past-president of the apex south-east socio-cultural organisation, Ohanaeze Ndigbo, Chief Ralph Uwechue, was also from Delta State and from the same senatorial zone with Dr. Okowa. The PDP VP candidate, prior to being elected governor of Delta State, was the senator representing Uwechue at the Senate. Okowa is not just governor of Delta State in the south-south of the country, he is, at tye risk of repetition, Igbo.

Nigeria is presently on the precipice. As we match ahead in our search for leaders that have what it will take to pull the country back to the path of growth and stability, issues that can engender this quest should be germane in our daily discourse.

For the uninformed, Okowa’s type of politics and management of man and resources at his disposal are highly above par