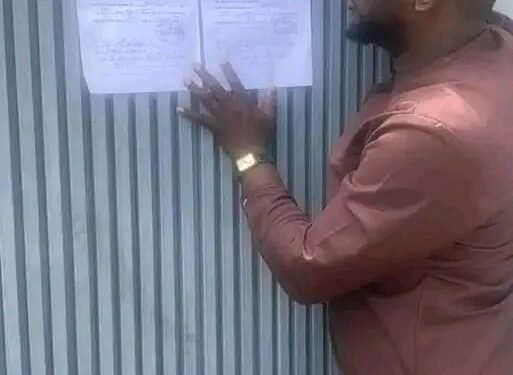 A Notice of Appeal has been pasted on the iron gate at the home of Olorogun David Edevbie in Afisere, Ughelli North Local Government Area of Delta State.

Edevbie is a contender to the People’s Democratic Party (PDP) governorship ticket for the 2023 election and a Federal High Court presided over by Justice Taiwo Taiwo had ordered that his name be listed as the PDP candidate in place of Rt. Hon. Sheriff Oborevwori. Sheriff emerged candidate after the party’s primaries in Asaba, Delta State.

The pasting of the notice is sequel to the fact that Edevbie was alleged to have ran away from home to avoid being served the notice of the APPEAL COURT asking him and his legal team to appear on Monday 8th to defend the Justice Taiwo Taiwo judgement.

In compliance to the Appeal order, a bailiff has pasted the notice on his (David) gate at Afisere House (his last known address).

“The general public should take note”, added the bailiff.