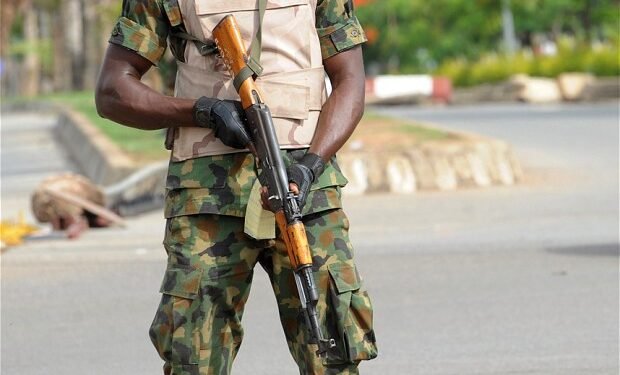 •A Nigerian soldier on duty

A major diplomatic twist was Thursday morning avoided as a soldier, name withheld, was taken out as he turned his weapon on some foreign staff of the United Nations (UN) killing one of them in the process.

The soldier believed to have been affected by post traumatic stress disorder (PTSD) started shooting aimlessly at the Damboa military base of the UN before turning his weapon on some of the the UN staff whom he called several names before emptying the rounds of his weapon at them.

Eye witnesses at the Damboa town base where the unfortunate incident happened told newsmen that most of the UN and some non-governmental organizations’ staff, including Nigerians, never waited for his bullets but started running for their lives after he had targeted the UN but failed to kill the pilot who dodged and escaped death.

“Having missed his target and slightly wounding the co-pilot of the helicopter, the soldier then turned his rifle on others waiting to board the aircraft back to Maiduguri.

“Efforts by his colleagues to stop him was fruitless as he killed one of them in the process with his Jack knife which he resorted to when his bullets were exhausted.

“It was at that point that the Commander ordered that he should be taken out before he killed more people because he was obviously not behaving normally again”.

Reacting to the incident, Theatre Commander, Operation HADIN KAI, Major General Chris Musa, said “he regrets to inform the public of a sad occurrence at one of our military bases today.

“A soldier shot and killed a staff of one of the NGOs providing humanitarian support in the North East.

“Same soldier also killed another soldier and injured the co-pilot of one of the UN helicopters.

“Own troops on the ground immediately neutralized the errant personnel. The injured co-pilot has been stabilized while the corpses of the deceased have been moved to the 7 Division Hospital.

“Detailed investigation into the incident and subsequent remedial actions have commenced into the highly regrettable incident.

“Further details will be provided later, he said through the spokesman of the Theatre, Major Samson Zhakom.

Meanwhile, a visit to the Maiduguri Airport on Thursday indicated that helicopter services may have been temporarily grounded until this puzzle of a humanitarian staff of Médecins du Monde (MDM) killed by the soldier as a result of several stabs she received from the offensive soldier.

Some of the airport staff who whispered to this reporter said that some UN staff returned to base immediately the issue was brought to their notice through phone.

There was palpable silence in the international airport when we visited although security has been stepped up especially early yesterday morning when this sad incident happened in Damboa.

“We heard one soldier started shooting sporadically until he emptied the magazine of his rifle. It was at that point that he took his knife from his heap and began harassing passengers waiting to board the Helicopter.

“He stabbed the lady of MDM who fell down while they were running away from him and injured the co-Pilot. The lady was flown to Maiduguri through the airport here for treatment but could not make it. She was brought in dead,” said our source.

The incident, which happened around the Barracks area where the Helipad for landing exists, has sent panicky signals to many residents of Damboa town who now worry about their safety with these kinds of psychological illnesses which should be fished out quickly before more damage is caused within their ranks.

READ ALSO  What Nigerian Girls Need to Inspire Them to Greatness, By Williams

Before the advent of the current Theatre commander, General Chris Musa, many of the soldiers used to stay for months if not years without getting pass to move out and recuperate from emotional stress caused by the war.

Many military and non military actors are dealing with post-traumatic stress disorder in the insurgent war which has since passed its first decade and entering the second one.

Sources within the diplomatic circle in Maiduguri allege that the federal government has done the needful to ease any foreseeable tension between Nigeria and Ethiopia while plans are on to fly the lady’s corpse home today for burial.

On the side of the UN, this incident might impair their responses to humanitarian services because a release circulated yesterday stated that flights will be suspended for a while as they continue to monitor the situation.

Statement by the Humanitarian Coordinator for Nigeria, Matthias  Schmale, on the killing of an aid worker in Damboa, Borno State

Yesterday’s killing of a staff member of the humanitarian non-governmental organization Meědecins du Monde in Damboa, Borno State is deeply disturbing and sad. On behalf of the United Nations, I convey my heartfelt condolences to the aid worker’s family and to her colleagues. I also wish a speedy recovery to a pilot working with the UN Humanitarian Air Service (UNHAS) who was injured in the deplorable attack by an apparently rogue soldier.

All humanitarian staff working in north-east Nigeria deserve our fullest respect for their courage and commitment to stay and deliver life-saving assistance to people in need in often difficult and dangerous circumstances. Humanitarian workers must be protected.

I laud the Government and the military’s efforts to speedily investigate yesterday’s incident and urge them to strengthen remedial measures to prevent similar incidents in the future.

The children who attended the public presentation of the children's book and animated narrations on Lt. General Tukur Yusuf Buratai,...

This is an Isolated Case — Zulum assures diplomatic world, condoles with UN over killed aid worker in Nigeria

Enemies of Progress: The Fake News