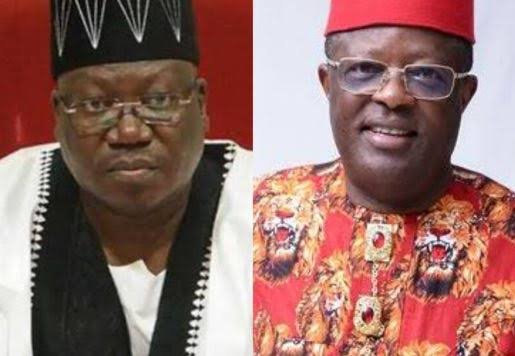 Umahi’s denial was contained in a statement issued by his media aide, Francis Nwaze, Saturday night, where he described reports suggesting he had withdrawn from the race as “fake news.”

The governor had on Saturday hosted Lawan in Abuja during which he affirmed his support for the Senate president’s quest to emerge as the APC flag bearer at the primary election scheduled for June 6 – 8.

Media adviser to the Senate President, Nasir Abdullahi, in a statement, said Umahi extolled the virtues of humility, teamwork, intelligence and unalloyed party loyalty of Lawan. “I pray you get the ticket if I don’t get it, because you are eminently qualified to be President of Nigeria”, Umahi was quoted as saying.

But in a sudden turn of events, barely hours after President Muhammadu Buhari hosted the APC presidential aspirants and formally backed Southern Presidency, Umahi says he was still in the race for President.

In a statement entitled “DISREGARD THE NEWS THAT GOVERNOR UMAHI HAS STEPPED DOWN FOR SENATE PRESIDENT AHMAD LAWAN”, and signed by Nwaze, Umahi urged members of the public to disregard the “fake news.”

Read the statement below;

Our attention has been drawn to a news story purportedly broadcast on the stable of one of the revered Television Stations in Nigeria, the Arise Television in which the Station announced that Engineer David Nweze Umahi has stepped down his aspiration for his fellow Presidential Aspirant and Senate President, Ahmed Lawal ahead of the Presidential Primary.

Without much Ado, I make the following clarifications to guide the teeming supporters of Engineer Umahi, members and stakeholders of the All Progressives Congress, APC, and Nigerians at large.

The news item is totally false in context and content. This raises a question mark about the credibility of the source of such fallacy, what never took place which is capable of putting Engineer Umahi’s aspiration in jeopardy.

For the sake of discerning minds, what happened was that Senate President, Ahmed Lawal in a last-ditch effort to ramp up partnership ahead of the APC Presidential Primary, visited Governor Umahi in his Abuja residence on Saturday where they both promised to support whoever amongst the two and other Aspirants that emerge the Flagbearer of the Party in the Primary. The Senate President even took out time to eulogize Engineer Umahi for making the Party proud through his purposeful governance in Ebonyi State.

There was no time during the visit that the issue of stepping down by either Engineer Umahi or the Senate President was discussed or even suggested.

It, therefore, becomes a serious concern how the Arise Television got themselves enmeshed in this kind of professional miscarriage of reality without verifying the authenticity or otherwise of their news source.

The teeming supporters of Engineer Umahi across Nigeria and beyond are encouraged to disregard the ill-fated news item which is by all standards fake, and go about their solidarity on the assurance that His Excellency the Governor is still very much in the race to develop Nigeria, God willing, he will emerge in the Sunday Presidential Primary of our great Party, the All Progressives Congress.

Wizkid, a Nigerian superstar, has vowed to retire older Nigerian politicians at the upcoming 2023 polls. He made the remarks...

Ortom Thumbs up for Senate over Impeachment Move against Buhari