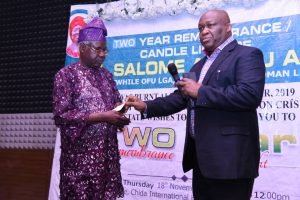 The family of the erstwhile Peoples Democratic Party (PDP) Woman Leader in Kogi State, Salome Abuh, who was killed during the 2019 governorship election in the state, has inaugurated a foundation in her honour..

The foundation “Salome Acheju Abuh Foundation (SAAF)” was inaugurated at the 2nd Year Remember/Candle Light for the deceased, held on Thursday in Abuja.

Mrs Abuh, a former Women Leader of PDP in Ofu Local Government Area of Kogi was burnt alive in her house at Ochadamu Kogi on Nov. 18, 2019 shortly after the announcement of the results of the governorship election held in the state on Nov. 16, 2019.

The Widower of slain woman, Elder Simeon Abuh, speaking at the launch event, solicited support of all to enable the family achieve the belief, struggle and the cause for which Salome paid supreme price for Nigeria.

Abuh also solicited financial assistance to rebuild the family four houses that were burnt during the unfortunate incident.

He recalled how his late wife was burnt alive a day after her 60th birthday in their family house, stressing that the homelessness of the family still continue after two years of the unfortunate incident.

He appealed to the people of goodwill and corporate/humanitarian organisations to come to their aid, to enable them own their dream home again.

He said that an account: Simeon Babani Seidu Abuh, No. 2006643090, domiciled in the Zenith Bank plc, has been dedicated for the purpose.

Abuh also reacted to the court judgment delivered at the High Court of Justice, Idah, Kogi State on March 23, where one Ocholi Edicha was arraigned and found guilty of five count charges with regard to killing of Salome, for which he was to serve 12 and a half years jail term.

“Is it possible for one person to commit such magnitude of destructions of life and properties in our compound and other key PDP stakeholders houses in the community within such a few hours?

“Kogi State Police Command paraded six boys, including Edicha who were said to have confessed to the crime.

“Surprisingly, five were charged for armed robbery and only Edicha became the murderer and arsonist. Police is our Friend, Police is their Friend,” Abuh said.

The News Agency of Nigeria (NAN) reports that the PDP Governors Forum at the event made a donate of N10 million to the foundation.

The Director General of the Forum, Hon. CID Maduabum, who presented the cheque to the husband of the deceased, stressed the need to improve on the security of the country.

Maduabum, who stressed the need to address impunity and injustice in the country, also expressed the belief that if the electoral process of Nigeria was being done electronically, the death of Salome might have been averted.

He reiterated the PDP governors call for the rejigging of the security architecture of the country in such a way that policing could be decentralized.

“But of course, there must be proper safeguards because if you have some governors that promote violence, then it is also very dangerous to leave such security in their hands.

“We believe that there should be proper checks and balances to ensure that security prevails in Nigeria,” Maduabum said.

He also urged Nigerians to speak out against electoral violence as well registered for the Permanent Voter Cards to elect godly leaders.

“Developing the ability to reset the mind to think correctly can make a great politician that would not fuel violence, leading to living a life of high integrity and peace in the land,” he said.

Also in her presentation titled “ Violence Against Women in Politics”, Oluchi Nwosu help leaders to help victims get justice.

Nwosu also urged media to step up the campaign against electoral violence in the country.