Cost of Food, Others Should Dominate Political Discuss Not 2023, Says Retired AIG 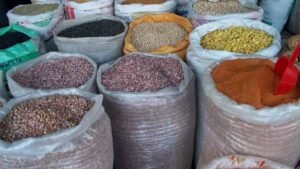 A retired Assistant Inspector-General of Police, Felix Ogbaudu, has faulted heightened discussion on zoning and the choice of President in 2023 by politicians in recent times.

Ogbaudu, who said this in an interview with the News Agency of Nigeria(NAN) in Abuja, urged politicians to concentrate more on finding lasting solution to the challenges faced by Nigerians.

He stressed that with the rising cost of food, insecurity and other challenges, it was more reasonable to seek measures to tackle them than make 2023 elections a priority.

He said, “politicians have not been helpful in the struggle to tackle the myriad of challenges Nigeria is facing, particularly the issue of insecurity and rising cost of food.

“Recently, governors met and the issue that was top on their list was the issue of zoning.

“Rather than emphasising ways and means of proffering solution to all our challenges, they are talking about where the presidency should go to come 2023.

“Is that the major challenge at the moment when insecurity is becoming so worrisome in this country?”

According to him, insurgents attacked a military formation in Sokoto State a few days ago.

“You can imagine the audacity they have to attack a military formation and killed some of our military personnel, police officers and civilians and our politicians are discussing 2023.

“Kidnapping is now the order of the day,” he said.

He expressed optimism that the challenges were surmountable if major actors, particularly politicians, played their roles well, adding that commitment was paramount.

He called for adequate empowerment of security agencies.

“I always ask why our police officers are not at their optimum in Nigeria but are celebrated in other countries.

“Our police officers who are drafted to other countries for peace keeping perform excellently but here they are handicapped.

“That means there is something we are not doing right as a country and we need to put measures in place to make them more effective,” he said.

He further called on the need to tackle economic issues ranging from education, infrastructure to unemployment.

“The fall in standard of education is an issue I have been trying to get answers to.

“How did the situation deteriorate this much in spite of the increase in schools across the country.

“Apart from the recent issue of abductions in schools, students’ performance has dropped beyond imagination.

“People now buy certificates even up to doctorate degree and things have degenerated to the extent that we are now producing unemployable graduates.

“Also the rising case of unemployment is worrisome and as such more youths are getting into crime because we know an idle mind is the devil’s workshop.

“There is poverty all over the place. Even some state governments are not doing well,” he said.

Ogbaudu called for good leadership, sincerity of purpose, fear of God and honesty, while shunning sentiment.

He commended the revival of the rail system by the present administration and advised that such be replicated in other sectors of the economy.

PRESIDENT BUHARI’S 2023 NEW YEAR MESSAGE My Fellow Countrymen and Women. A very happy and prosperous New Year to you....