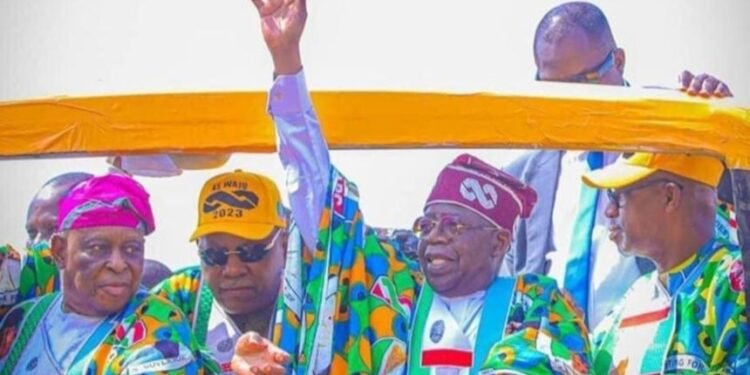 Bola Tinubu on Wednesday accused the Buhari administration of using the raging fuel scarcity and recently-introduced naira notes and cash handling policies of the Central Bank of Nigeria (CBN) to blunt his chances at the ballot box next month.

“Whether you change the ink of the naira or spend money till you are in debt, things won’t turn out as you hope, we are the ones who will win the election, and our opponents will fail,” Mr Tinubu said.

The presidential candidate of the ruling All Progressives Congress was expressing his disapproval over the fuel crisis that has seen long queues across the country, with citizens spending productive hours at filling stations while also paying more to get the crucial commodity.

The CBN also recently announced changes to the national currency and vastly limited amounts that could be withdrawn in a day from bank accounts across the country. The currency change has seen millions of Nigerians besieging banking halls across the country in a rush to deposit cash still in their possessions. Politicians like Mr Tinubu, who have been counting on using cash to sway the election, have been grumbling over the policy changes.

Recognising the potential devastation of acute fuel shortages ahead of a presidential election, Mr Tinubu appeared not only to distance himself from the policies but to insinuate a conspiracy against him by President Muhammadu Buhari, his political ally whom he helped into office in 2015. Mr Buhari has indicated his intention to allow a level-playing field during the upcoming election, a position that has unsettled Mr Tinubu who was looking forward to a generous payback for his contribution to Mr Buhari’s electoral successes in 2015 and 2019.

Mr Buhari said he backed CBN’s decision to recolour naira notes in order to restore control over the money supply. Millions of Nigerians have been forced by the programme to transfer their cash to banks before it loses its legal tender Labour Party have also been previously accused of paying voters. status next week. While the general public has lamented the policy’s haste, political moneybags have more insidious discontent.

Mr Tinubu and his crew have a niche for influencing elections with money through various means, including vote buying. On the eve of the 2019 general elections, multiple bullion vans were seen entering his private residence in Ikoyi Lagos, drawing wide criticisms.

Mr Tinubu said the government’s plan to remove subsidies and increase in fuel prices are tactics to scare the voters, promising a reduced price at the pump if elected on February 25.

“They want to put their caps on their waist, they are planning to increase the price of fuel, don’t be worried, we will bring it down. They don’t want the election to hold, but will you let them?” he asked rhetorically.

“They think they can cause panic, the sabotaged fuel supply, whether there are means on vehicular movement or not, on election day, we will go and vote, and we will win,” he added.

President Buhari in Daura for Eid-el-Kabir