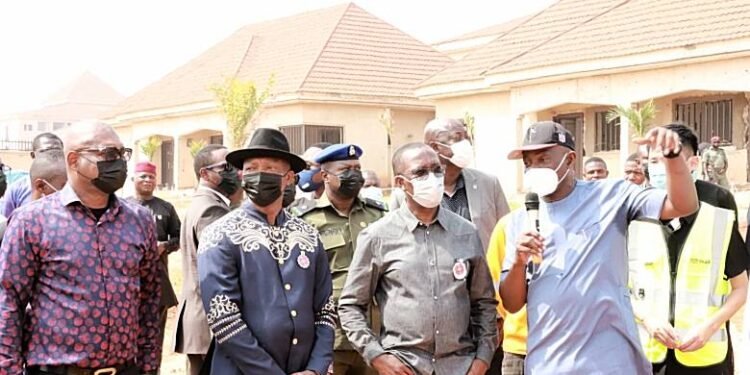 Former Vice President and Presidential Candidate of Peoples Democratic Party (PDP) and creative industry stakeholders have lauded Governor Ifeanyi Okowa for his massive contribution to growth and development of tourism in the country.

Atiku gave the commendation on Wednesday in Asaba while inaugurating Asaba Leisure Park and Film Village built by Okowa and named after late Mrs Mariam Babangida.

Atiku said that only the PDP government could partner the creative industry to harness potential inherent in it, and urged stakeholders to support the party in the coming elections.

“What makes this event special is the naming of this place after Mrs. Mariam Babangida. This is because she was a lady who introduced very historic important programmes in the lives of our women; particularly, rural women.

“I am not sure now that the money had been accessed by the industry since the PDP left government. So for the creative industry to make progress, they need to have a partnership that believes in the future and the contributions of the industry to our economy.

“I would therefore like to draw the attention of the leadership and members of the creative industry that your best partner in the development and advancement of the industry is a PDP-led government.

“So, let me call on you again and your members to make sure that this opportunity that would be available to Nigerians next month, that you play active role, to make sure of the return of the PDP to government.

“I want to pledge to you that if you elect PDP in the next election, we will go with you, so that you can access the N100 billion that would be available to you for the promotion of the creative industry.

“Therefore, I congratulate the government and people of Delta State for being pacesetters in the development of the creative industry,” Atiku stated.

Earlier, Governor Okowa had said that the Leisure Park which had facilities for recreation and a zoo, with different species of animals, was named Mariam Babangida Leisure Park; in recognition of her contributions to Asaba community and the society.

He commended Nollywood and the creative industry for their inputs leading to the construction of a Film Village alongside the Leisure Park and Zoo, adding that Delta had become the next tourism destination in the country.

“We decided to name the Leisure Park after our great mother, the late Mrs Mariam Babangida because of the impact she made on humanity and the Asaba community and I am glad that her son, Mohammed Babangida, is here today to witness this inauguration of the facility named after his beloved mother.”

In his remarks, Babangida commended the state government for the honour and recognition of their mother, adding that her legacies would continue to live long after her passing.

Creative industry stakeholders including Zeb Ejiro; Tony Akposheri; Ali Baba; Francis Agoda and others expressed appreciation to Governor Okowa for giving them an edifice to practice their profession.

If elected President of the Federal Republic of Nigeria, the Peoples Democratic Party's presidential candidate, Atiku Abubakar, has pledged to...

Emefiele: DSS Warns Nigerians — do not undermine us