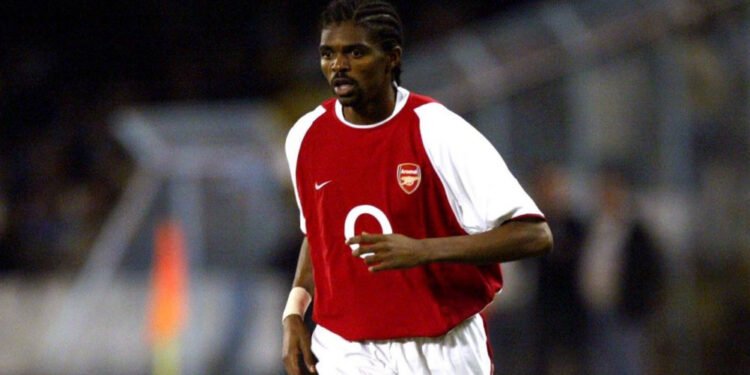 Former Arsenal forward, Nwankwo Kanu, has backed Arsenal to win their first Premier League title in 19 years after the Gunners passed another huge test in their title charge, defeating Manchester United 3-2 at the Emirates on Sunday, PUNCH Sports Extra reports.

The Gunners were held by Newcastle at the start of the month but won at Tottenham last week before avenging their only defeat of the season against United. And in beating United, Arsenal displayed the qualities of champions.

They fought back from conceding an early goal, went on to take the lead and then scored a late winner from Eddie Nketiah after the visitors had made it 2-2 midway through the second half.

Kanu, who was a member of the Arsenal side that famously went the whole season undefeated, earning the eternal nickname of ‘The Invincibles’ believes Mikel Arteta’s side has shown enough character to land the EPL title.

“Can you believe it? Well done boys. What a game! The Gunners showed great spirit and never gave up. Yes, we (Arsenal) can start dreaming of the title,” Kanu wrote on his WhatsApp status after the Gunners victory on Sunday.

The two-time African Footballer of the Year, who joined Arsenal from Inter Milan for just £4m in 1999, was popular among Arsenal fans during his five-and-a-half years at the club.

Kanu won two EPL titles, two FA Cups, Community Shield medal with the Gunners and managed 43 EPL goals in 195 games. The former Nigeria captain went on to play for West Brom and Portsmouth, where he finished his career in 2012.

Oliseh, who worked as FIFA Technical Expert at the 2022 World Cup alongside Arsene Wenger and Jurgen Klinnsman, hailed the spirit of the Gunners in the win, believing that the result over in-form United shows that they have the credentials to win the league title.

“Exceptional, sovereign and champion-like performance by this season’s Arsenal till now. They were tactically classy, with and without the ball, coupled with well-orchestrated transitions with runs into pockets that hurt Manchester United. Don’t bet against this team.”

Arsenal are now at the halfway stage of the season and have amassed 50 points from 19 games. The Gunners will continue their quest for the title when they travel to Goodison Park to face struggling Everton in a league game on February 3.

Moses Omo-Ikirodah: On a Mission to Serve His People…