Pilgrimage: Jubilation as Delta Contingent, Others Arrive Safely in Amman 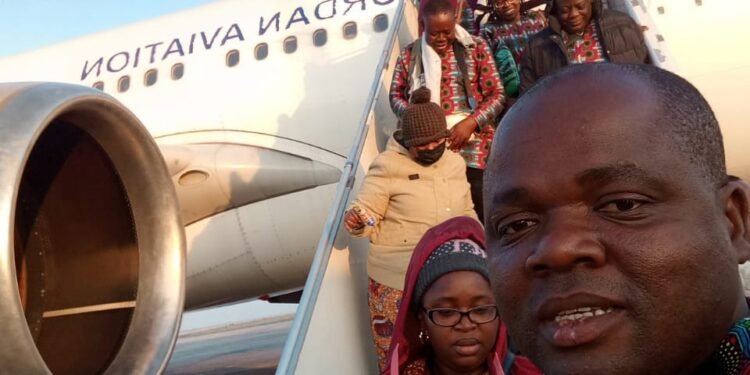 By Andrew Ikehi in Amman in Jordan

Jubilation, excitement and shouts of hallelujah, Tuesday rent the air in Amman, the capital city of Jordan as over 300 Christian Pilgrims from Delta and Akwa-Ibom states landed safely in the Holy land.

The Boeing 747 chartered flight which took off from the Abuja Airport at about 12:52 am Tuesday, touched down at the prestigious Queen Alia International Airport exactly 4:50 am (Nigerian Time) and 6:50 am (Jordanian time).

All continents who are full of excitement and in high spirit, expressed appreciation to the State Governor, Senator Ifeanyi Okowa fie the privilege to embark on the spiritual exercise just as they expressed confident that the exercise would help in rejuvenating their spiritual consciousness and enhance their understanding of the Bible; the Holy writ.

Speaking in an interview, one of the Pilgrims, Barrister (Mrs) Tega Peace Odudu said that the exercise would help in creating better understanding of events recorded in the holy writ; the bible.

Barrister (Mrs) Odudu while commending the State Governor, Senator Ifeanyi Okowa for his sustained sponsorship of the exercise, further noted that the exercise would afford participants the opportunity to pray for themselves, their families and, indeed the State.

Another participant, Mr Lucky Aleh while, commending the State Government for the programme, said that he had long wished and prayed for this opportunity, stressing that he would not take it for granted, but cash in on it for increased spiritual rejuvenation.

Our correspondent further reports that all the Contingents are currently in high spirit and doing well in Jordan just as they are expected to proceed to Israel in the next few days.

(PRESS STATEMENT) Julius Berger Nigeria Plc has been described as a company habitually, brilliantly benchmarking engineering professionalism in the country;...

OPINION | Omo-Agege and His 50 Lies, By Friday Ewiwilem

2023 Presidency: Tinubu has Nothing to Offer Nigerians, says Gov. Udom