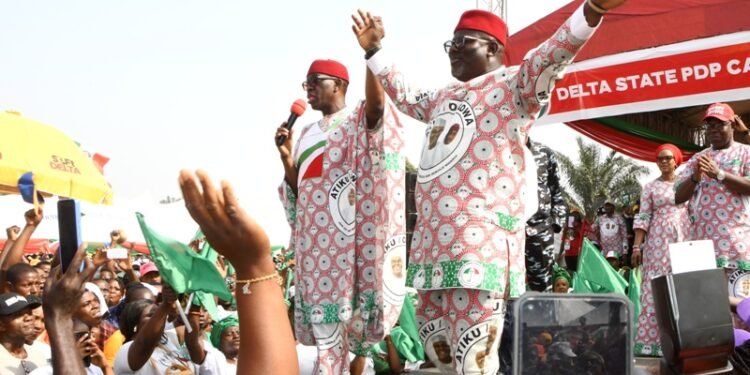 Today, (Friday), the 13th day of January, 2023, Senator Ifeanyi Okowa, will lead Delta State PDP Campaign Team to Ika land with stops at Agbor and Owa-Oyibu. The team will speak to the party members and neutrals on the need to massively vote for the PDP in all the scheduled elections. Senator Okowa does not need a prepared speech or teleprompter for him to effortlessly reel out the feats our PDP-led Government recorded in about eight years under his watch.

Senator Okowa comes with his scorecard which is incontrovertible as we are all involved in the grading. The Ika people will not be reminded that the Old Lagos-Asaba Road was completed and fixed with streetlights by Senator Okowa. The Owa Ekei Road, having spurs to Owa-Oyibu and Ute-Okpu has his imprint. The many paved roads in Owa, Ime-Obi, Abavo, Alihami, Ute, and several other communities would not have been possible without him.

The Ika people must give credit to Senator Okowa for establishing the University of Delta, Agbor, with two other campuses in line with the integration of Ika as a monolithic people. We must accept the opportunities he provided many Ika people to serve in this administration. It will be waste of time to give much space, highlighting ALL that Senator Okowa did and still doing for Ika. The records are visible and tangible.

Governor Okowa should be provided a red carpet with the intent to welcome him as a great ambassador of the Ika Nation. His triumphant entry will further be used by him to appeal to his people to vote for the PDP in the coming elections and it will also be an opportunity for him to receive blessing and endorsement in his quest to be the Vice-President of our dear country, Nigeria. We look up to him to introduce his successor, Hon. Sheriff Oborevwori to us that will guarantee a seamless transition and continuation of his projects and programmes.

Senator Ifeanyi Okowa runs for the Vice-Presidency with an intimidating entry point. That he became a medical doctor a few months after his 21st birthday is not in contention but his political growth marvels even his traducers.

He was a Local Government Secretary when he was less than thirty years, leaping to the position of Local Government Chairman a few years later. From there, he was appointed a Commissioner and later Secretary to the State Government. At a time when it appeared his political light was extinguishing, he emerged as a Senator to represent Delta North. Though a first-timer in the Red Chamber, he was appointed Chairman of, the Senate committee on health. It was while serving as a Senator that he fought against all odds to become the Governor of Delta State in 2015 with a landslide victory during his second term bid.

Senator Okowa can be likened to a rare gold that went through all known processes in the purification of a precious metal. He is versed in administration and audacious in oratory irrespective of his gentle disposition.

The Vice-Presidency project of Senator Okowa is not without slight hiccups. It is rightly so. The only sane and proper thing for Ika in particular and Deltans in general to do, is to shove those drawbacks aside and give him a basket of not less than a million votes. This is the best way to show appreciation to the “Roadmaster”.

Rtd AIG: Rising Cost of Food, Insecurity Should be of More Concern to Politicians Than 2023