Tinubu to Nigerians: If Elected President, No Matter How Long You Protest, I’ll Remove Fuel Subsidy 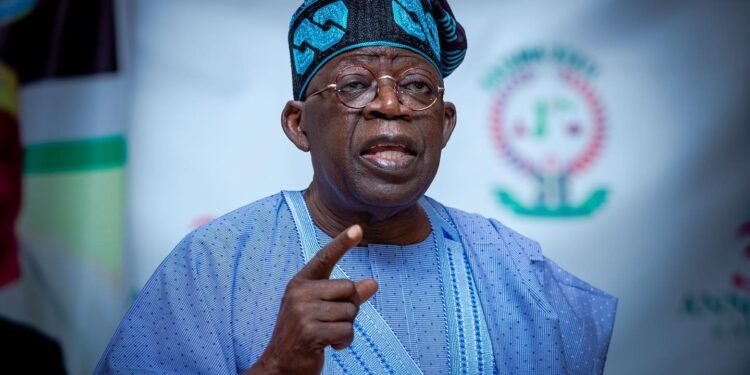 How can we be subsidising fuel consumption of Cameroon, Niger, Benin Republic? No matter how long you protest, we are going to remove the fuel subsidy.

Senator Bola Tinubu, the Presidential Candidate of the All Progressives Congress (APC), on Thursday promised entrepreneurs that if elected he would reposition Nigeria for greater opportunities and development of its citizens.

He also promised to work towards creating enhancing the security situation in the country to allow entrepreneurs have an enabling environment to do their businesses.

Tinubu made the pledge at a business luncheon with business owners in Lagos.

The luncheon, entitled “Business Forward”, held at the “Wings“ located on Victoria Island.

On the issue of fuel subsidy, he said if elected he would take bold decisions that would turn the nation’s economy around.

He said: ‘Nigeria will not continue to subsidise fuel consumption in neighbouring countries.

“How can we be subsidising fuel consumption of Cameroon, Niger, Benin Republic? No matter how long you protest, we are going to remove the fuel subsidy.

“First, the primary responsibility of government is to protect the lives, property and prosperity of its citizens.

He said as governor of Lagos State, fixing the difficult security situation at that time was his first priority.

“Only after we secured the state and changed its reputation for the better, could we embark on the economic reforms that have ultimately produced the vibrant and active megacity of today.

“I am committed to securing Nigerians from violence and the fear of such violence, terror, kidnapping and banditry have no place in the society I envision,“ he said.

Tinubu told his audience that upon assuming office as president, he would move to implement several measures.

“We will increase the numbers of our military and non-military security forces and specialist anti-terrorist battalions would be established.

“Our Critical National Infrastructure Protection Plan will deploy aerial and ground surveillance technology to survey the most dangerous areas and secure our country’s vital national infrastructure and installations.

“We shall acquire and upgrade the tactical communications and mobility of our troops and security personnel.

“We must also devote greater attention to the care and welfare of our military and security forces who put themselves in harm’s way to keep us safe.

“In summary, our objective is to be able to out-manouvre outwit and outflank the terrorists and criminal groups. They want to defeat our democratic and good society. We shall defeat their evil one.

“As we fight insecurity, we must deal with our economy at the same time. We know that business and insecurity cannot thrive side-by-side,” Tinubu said.

He said his government would give room to allow the private sector to thrive by not interfering in their various businesses but be open for collaboration.

According to him, where the private sector is doing well, his government will not interfere.

“Our guiding principle regarding economic policy shall be to provide the right policy framework so that business can flourish.

“I want to do more than help existing businesses to exist. We must create the space where new sectors and lines of business can open.

READ ALSO  NNPC Ltd and Echoes of 2007, By Magnus Onyibe

“We must grow this economy so that it can accommodate over 200 million people with a decent standard of living.

“Part of the virtuous economic cycle we seek to create is to collaborate with the private sector to bring about massive infrastructural renewal.

On their part, the business entrepreneurs at the luncheon raised issues around education, healthcare development, electricity, investment climate, multiple exchange rates and prevailing oil subsidy, asking how Tinubu would deal with the challenges.

“We shall not be afraid to regulate wisely. We cannot allow instances like the collapse of FTX to happen here.

“We must protect businesses, consumer and investor confidence in equal proportion and improve the nation’s power sector which is critical to any economic development and strengthen the health sector,” Tinubu said

Others were former commissioners in Lagos State, Yemi Cardozo, Dele Alake and former EFCC Chairman, Nuhu Ribadu, among others.

Why Tinubu will Win Presidential Poll, By APC Chieftain