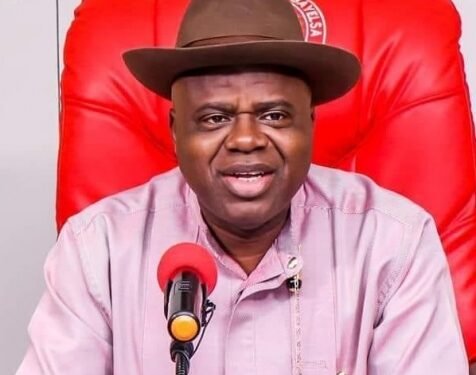 By Shedrack Frank
The Bayelsa Government has urged the Revenue Mobilization, Allocation and Fiscal Commission (RMAFC) to obey the Supreme Court order over the disputed Soku oil and gas fields, which ownership is in contention between Bayelsa and Rivers States.
Gov. Douye Diri made the call on Thursday when he received a fact-finding team from the federal agency in Government House, Yenagoa.
The News Agency of Nigeria (NAN) reports that the governor, who was represented by his Deputy, Mr Lawrence Ewhrudjakpo, said the apex court had given an order for proper demarcation of the boundary between the two states as decisive step to resolve the impasse.
He lamented that while the National Boundaries Commission is yet to implement the order, the RMAFC decided to be paying accruals from the disputed Soku oil wells to Rivers State following a later judgement by a lower court on the same issue.

The governor said, for the sake of equity and justice, the accruals should be saved in an escrow account pending the final resolution of the matter.

He also recalled that the Bayelsa State Government had since secured a judgement against the Federal Inland Revenue Service (FIRS) which is yet to be implemented by the Commission.

Diri, who charged the RMAFC to strictly apply the right indices for revenue allocation and distribution, said the Commission needed to be more circumspect in taking decisions in respect of revenue disputes between states in the country.

According to him, the present revenue distribution formula does not meet the development needs of Nigeria as a Republic with 36 federating units, and called on the Commission to display integrity and competence in ensuring that the right thing is done.
His words: “For us in Bayelsa, the indices being applied and used for revenue distribution are not correct, but skewed against us. Your duty as revenue allocation commission is quite a big responsibility to ensure the application of the right indices.
“An issue I want to speak about briefly here is the RMAFC’s hasty decisions on revenue disputes between states.

“We have an issue with the Rivers State Government over the disputed Soku oil wells. While the matter is yet to be resolved, we expect the accruals to be paid into an escrow account.

“While that has not been done, the Rivers State Government is relying on a lower court judgement on same issue to get all the revenues from the assets.

“In another instance, the Bayelsa State Government got a favourable judgement against the Federal Inland Revenue Service (FIRS), for which we expected the RMAFC to also give us our money but it had not complied,” he said.
Speaking earlier, the Leader of the RMAFC delegation, Mr Andrew Agbaga, said the 12-member team was part of the Indices and Distribution Committee of the Commission, which is currently visiting all the states in the country.
Agbaga, who is the Federal Commissioner representing Delta State at the Commission, disclosed that their assignment in the state was to verify whether what is approved and distributed by RMAFC is what actually gets to the states and local government areas.
He said another justification for the visit was to see if the indices being used for revenue disbursement were in conformity with approved principles.
(NAN)
Tags: Bayelsa GovtGovernor DiriRivers State GovernmentRMAFCSoku Oil Well