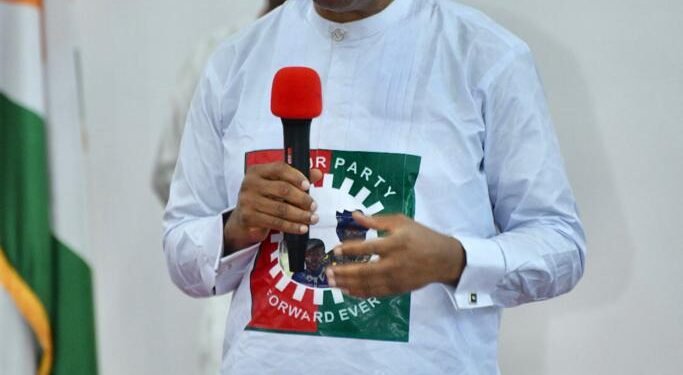 The Presidential candidate of the Labour Party, Mr. Peter Obi on Tuesday told the people of Akwa Ibom and indeed the rest of Nigerians that the era of unfulfilled promises is gone for good with him and Yusuf Ahmad Datti running the Presidency.

Obi told the jubilant organic crowd that came to listen to him that, “When I came here, I was told that the most important thing for the people of Akwa-Ibom is the Deep Sea Port and I promised that when I leave this place, I will go and see the Port so that when I start as the president, I will put it in place.

“That sea port was visited in 1983. Senators came here and said it was going to be a Deep sea port, next year will be 40 years. 40 years is what the children of Israel stayed in the wilderness. It is about to work after 40 years”.

The LP flag bearer noted that for the years the Federal Government has not done anything in Akwa-Ibom. All they come here to do is to make promises, promising that that era has come to an end.

“We want to make Nigeria to work again. A new Nigeria is possible with you. What is Peter Obi and Datti Ahmed going to do? I want you to listen to me.

“If you check the major parties and their presidential candidates, I am the youngest. Also Datti and I, put together, have the youngest average age compared with other candidates. So we are ready to work. If you add our educational qualification, we are far ahead of others. We have been successful in our businesses, we are entrepreneurs, we have created wealth and we are prepared to create more.

“Our first priority is to secure Nigeria. We will provide the security. We will unite Nigeria. It is only politicians that divide us, we do not have reason to be fighting each other. We are tired of the division. Everybody will come together, we will provide law and order.

Obi assured the people that under his Presidency, “There will be peace. Police will not be harassing our youths again.

We will make police to be friendly and not turning people to be suspects simply because you are not dressed well.

“Nigerian citizens cannot be suspects in their own country. We will retrain the police, the army and all other paramilitary to show love to the citizens.

On education sector, Obi said that he and Datti will make education work again. You can no longer go for a four year course and you end up spending 7 years. It can happen again. We will sit down with lecturers and discuss.

On Agriculture, the LP standard bearer said that, “Nigeria will feed itself because we have large arable land. For instance, Borno State has large land and it would be used for agriculture. Borno has landmass of over 70,000 square kilometres and Akwa-Ibom has only 7,000, so Borno is ten times Akwa Ibom. Why would they be fighting over resources in the Akwa-Ibom while they have untapped resources in Borno. We ensure that states become productive and develop their resources, use it and develop their states. We will make this country work again and you will be proud of this country.

But the LP chair noted that democracy has his best features, of giving the citizens the opportunity to vote and sack those who have not done well. Our people say every day is for the thief, one day is for the owner.

“ 2023 is the time for us to separate the goats from the sheep. And I know that Akwa-Ibom people, knowing that you are from the South South, you will do the needful.

The National Chairman charged the Akwa Ibomites to come in enmass in February to vote for their in law Peter Obi and Labour Party.
“They have been deceiving us over the years, they bring different excuses, they will bring money, if they bring money collect it and put it in your pocket. So whatever tricks they come with, let us defeat them this time and teach them a lasting lesson.

We can no longer be fooled. And the only way we can prove it is for us to vote Peter Obi, vote competence, vote capacity, vote pedigree, and vote dignity.