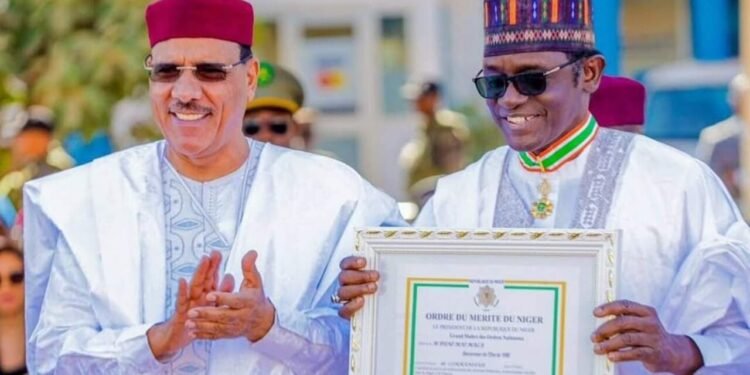 This is contained in a statement by Buni’s Director-General Press and Media Affairs, Alhaji Mamman Mohammed, in Damaturu on Sunday.

He said  Governor Buni was decorated with the ‘Commandeur dans l’ordre du merite du Niger’ in Niamey, the capital of Niger Republic on Sunday.

Bazum said the honour was in recognition of Buni’s contribution to bilateral, economic and social relationship between Nigeria and Niger Republic.

He added that the award had placed the governor in a position of an ambassador who would strengthen relationship between the two countries.

In his remarks, Buni expressed happiness for the award, saying that it would spur him to do more in the interest of the two neighboring countries.

“Yobe shares international borders with Niger Republic, therefore, we will strengthen peace, peaceful coexistence, and economic prosperity among the border communities of the two countries,” he said.

On receiving the Niger’s National Honour Award, Mohammed said Buni was accompanied by the President of the Senate, Ahmad Lawan, members of the state Executive Council, members of the national and state legislature, among others.

The News Agency of Nigeria (NAN) reports that Buni had also received Nigeria’s National Honour of Commander of the Order of the Niger (CON) in Oct.

Security Beefed up  in Yobe ahead of Buhari’s Visit Monday

By Nabilu Balarabe   Security has been beefed up in Damaturu ahead of President Muhammadu Buhari’s visit to Yobe...

2023: I Am Most Prepared Presidential Aspirant, Says Osinbajo