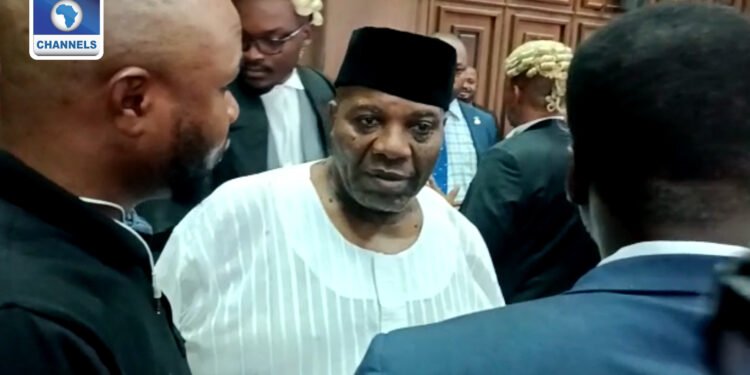 By Taiye Agbaje
Mr Doyin Okupe, former Senior Special Assistant (SSA) on Media to ex-President Olusegun Obasanjo, on Monday evening, paid the sum of N13 million for the 52-year jail term bagged for N240 million money laundering offence.
The News Agency of Nigeria (NAN) reports that Justuce Ijeoma Ojukwu, in a judgment, had found Okupe guilty in 26 out of the 59 counts preferred against him by the Economic and Financial Crimes Commission (EFCC).
Justice Ojukwu had ordered that the 26 counts, which attracted 2-year jail-term each, would run concurrently, meaning, the convict would only spend two years in prison.
The judge, however, gave an option of N500, 000 in each of the counts, amounting to N13 million, which must be paid before 4:30pm (the close of work) today.
She ordered that if Okupe failed to meet the option of fine within the time frame, he should be taken to Kuje Correctional Centre to serve his prison term.
However, a check at the court at about 6pm showed that  Okupe, who is the Director General of the Presidential Campaign Council (PCC) of the Labour Party (LP) Presidential Candidate, Mr Peter Obi, had paid the money.
NAN had earlier reported that the wife and son of Okupe had pleaded for leniency after he was convicted.
Mrs Omolola and Mr Adesunkanmi Okupe, while testifying to the convict’s good character, begged the court to temper justice with mercy.
Omolola decsribed her husband as a good man.
“I got married to him on the 1st of May, 1991.
“My husband is a very good person. He had been a role model to myself and children with sound Christian values
“I have never found him in any allegation of this before,. I will like to appeal to the court for leniency.
“My husband has dedicated his life to serve the nation and he is not here today because he is found guilty of the offence but because of his mistake.
“I ask the court to consider his health and age which is 70 years.
“He has run his family effectively my lord,” she said.
Also, Adesunkanmi said: “I have known him for 31 years.
“He is a man of honesty and integrity with great character..
“I have a privilege of being mentored by him throughout my life time.
“He had imparted in me high value of perseverance and hard work that greatness comes by following God, unbending faith and diligence.
“This among many other is what I have learnt about Okupe.”
He appealed to the court to be lenient
Besides, former Governor of old Anambra, Chief Chukwuemeka Ezeife, and former National Orientation Agency (NOA), Dr Idi Farouk, had also urged the court to temper justice with mercy in Okupe’s sentencing.
The judge had, earlier, stood down proceedings for Okupe to exercise his right under Section 310 of the Administration of Criminal Justice Act (ACJA) to call witnesses to testify about his character, before the court could proceed to pronounce sentence on the convict.
NAN reports that the court, presided over by Justice Ojukwu, had convicted Okupe for breaching the Money Laundering Act.
The judge held that Okupe was found guilty of contravening Sections 16(1)&(2) of the Money Laundering Act, for accepting cash payments without going through financial institution, in excess of the threshold allowed under the Act.
Okupe was said to have received N240 million in cash from the office of the former National Security Adviser (NSA), Col. Sambo Dasuki (rtd).
(NAN)
Tags: Col. Sambo DasukiDoyin OkupeFederal High Court

By Ikenna Uwadileke   Labour Party has appointed Mr Akin Osuntokun as the Director-General of its Presidential Campaign Council. This...

Obi on Okupe Conviction! — nothing demoralises me, I’ll still get Aso Rock