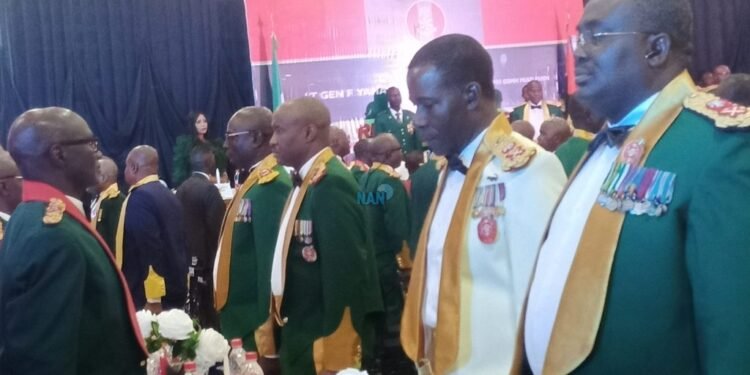 •The officers at the event. PHOTO: NAN

The Nigerian Army on Saturday, treated 62 retired and retiring generals to a regimental dinner and awards to honour them for their 35 years of meritorious service to the nation.

The senior officers comprising 24 major generals and 38 brigadier generals are those who retired or due for retirement within 2022.

The Chief of Defence Staff, Gen. lucky Irabor, said the event signified the beginning of a process for the retired and retiring senior officers who would transit into another phase of life that would be slightly differently from what they were used to.

Irabor said the officers deserved to be appreciated and honoured by the nation, adding that the event was a representation of national honors to them.

He said that a lot of changes had occurred in the context of welfare and administration in the armed forces, urging them to ensure that they make themselves happy in retirement

“So let me on that note, wish everyone of you the very best in retirement.

“We want to hear good testimonies about you and we will also appreciate that you do not forget the constituency that made you this past three and half decades.

“Like I said to you guys there is no engagement that would take your time and energy for as long as you live that will be demanding of you the way the armed forces have demanded of you, and of course the army in particular.

“And so it behooves on you to be the ambassadors of the armed forces, to change the orientation of many who do not know us.

“Remain our testifiers as to the uniqueness of the value that we bring to bear within the defence and security architecture of this nation.

“I would like to urge you to please keep up that spirit so that together we will continue to add value to our work,” he said.

Irabor commended the Army Headquarters for honouring its retired personnel for their services to the nation and the armed forces in particular.

The Chief of Army Staff, Lt.-Gen. Faruk Yahaya, said the regimental dinner was organised to acknowledge and appreciate the contributions and sacrifices of the senior officers to their fatherland in the past 35 years.

Yahaya said the officers had operated and traversed the gamut of the country and theatres of operations, as well as other countries where they had contributed to peace and security.

According to him, this is a celebration of life to appreciate and thank them, having served the noble profession of the arms and retiring in one piece after 35 years.

He urged them to be good ambassadors of the army and be ready to continue to be useful to the nation, adding that they were better positioned to help propagate and sell the army in good light.

He urged them to continue to deploy their expertise and competences in support of the service, adding that the army had opened avenues to engage retired officers willing to deliver their skills and competencies.

“As we speak, we have some of the retired officers at Army Resource Center, Nigerian Defence Academy, Nigerian Army School of Artillery, School of Infantry and across board.

“We are willing and ready to engage you because we know the quality of what was invested in you and what you can deliver and what you have delivered when you were serving,” he said.

Yahaya also appreciated the spouses of the retired officers for the support and sacrifices they made while their husbands were busy serving the nation.

He also advised them to continue make themselves useful by getting themselves engaged in profitable ventures in retirement.

The Chief of Administration (Army) Maj.-Gen. Ogbe Ali, said the event was first held in 2021 to appreciate retired and retiring generals, adding that similar events were  being organised at formations level for colonels and below, as well as soldiers.

Ali said the 2022 ooccasion was a continuation of that innovation and the 2nd in the series to celebrate 62 generals of the Nigerian army that retired during the year.

According to him, the ceremony is equally unique as it ushers them into the end of the year and the Christmas season.