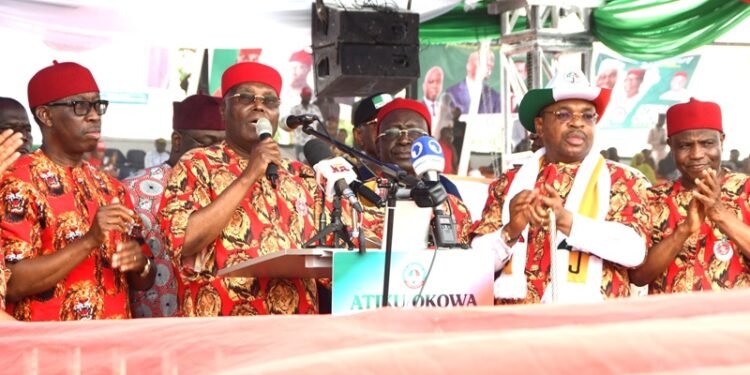 Okowa stated this at the flag-off of PDP’s Presidential Campaign in Imo held at Heroes’ Square, Owerri and urged Imo people and all Nigerians to vote Atiku-Okowa ticket for the unity, rescue and rebuilding of the nation from the ruins the APC-led Federal Government plunged her into.

He charged party faithful in the state to take the campaigns to the homes of the people to assure them that the PDP would resolve all security and economic challenges facing the nation, if elected.

“What I am seeing here today shows that you are indeed working very hard for the PDP and I am convinced that PDP will win the election in February, 2023.

“I greet all of you and I am very convinced that you are very ready to work for the PDP because you have come here in very large numbers.

“I urge you all to go to all our communities and preach to the people about the programmes and policies of the PDP as encapsulated in the Atiku’s ‘Covenant With Nigerians’.

“Only Atiku can unite Nigeria and rescue us out of the dire situation the APC has placed Nigerians with their inept leadership.

“Atiku has assured of a 10 billion dollar fund to support MSMES and you can be assured that whatever he says, he does.

“I have gone to various parts of the country and I am convinced that Atiku and PDP will win the election and when that happens, Imo State will be counted among the states won by the PDP,” he stated.

On his part, National Chairman of the party, Senator Iyorchia Ayu, said Imo had been a traditional PDP state since 1999 and urged the people to work together to win the presidential election for the party in 2023.

“Once we have won the Presidency, then be assured that Imo will be back to PDP. If you vote PDP be sure of economic growth because without security you cannot develop.

“We shall tackle insecurity so that our people can return to their various endeavours,” he stated.

Ayu warned against division in the party and urged the leaders to unite and work for the party’s victory in 2023, saying “We will not accept division in our party; everybody must work together to produce victory for the party”.

Chairman of the PDP Presidential Campaign Council and Governor of Akwa-Ibom State,  Udom Emmanuel, said Atiku Abubakar remained the only candidate to unify the country and bring back the industries and create jobs for the people.

Director-General of the PDP Presidential Campaign Council and Governor of Sokoto State, Rt. Hon. Aminu Tambuwal, charged Imo people to vote for the PDP to recover the nation from abject poverty, insecurity and economic malaise brought upon the country by the inept APC.