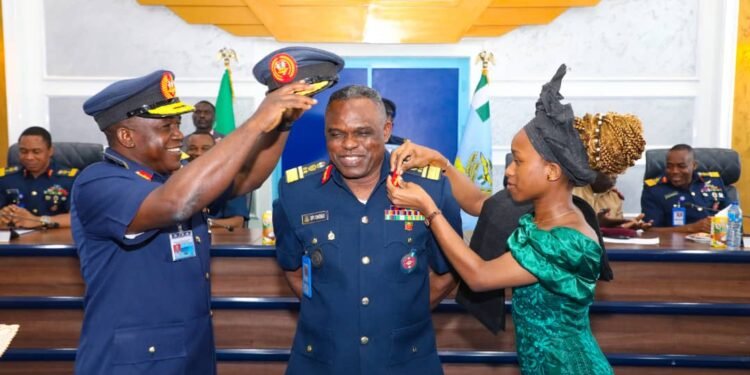 •The Chief of Air Staff, Air Marshal Isiaka Amao (l), being assisted by a young lady as he decorates one of the terminally promoted AVMs in Abuja, Dec 16, 2022.

The Air Force Council (AFC) has approved the promotion of 57 senior officers comprising of 31 Air Commodores (Air Cdres) and 25 Group Captains (Gp Capts) to the next higher ranks in the Nigerian Air Force (NAF).

He said the Chief of the Air Staff, Air Marshal Oladayo Amao on behalf of the entire NAF family heartily congratulates the newly promoted senior officers while charging them to see their elevation as an added responsibility that calls for strategic level critical thinking and analysis in proffering lasting solutions towards curbing the current security challenges in the country.

For those on terminal promotion, Air Marshal Amao wished them well in their future endeavours, while advising them to justify their terminal elevation by being exemplary ambassadors of the NAF who are ready, willing and ever ready to contribute their quota to the advancement of the Service.

While the terminally promoted officers were decorated earlier today by the CAS at a brief, but colourful ceremony at NAF Headquarters, others will be decorated with their new ranks at a later date to be announced soon.