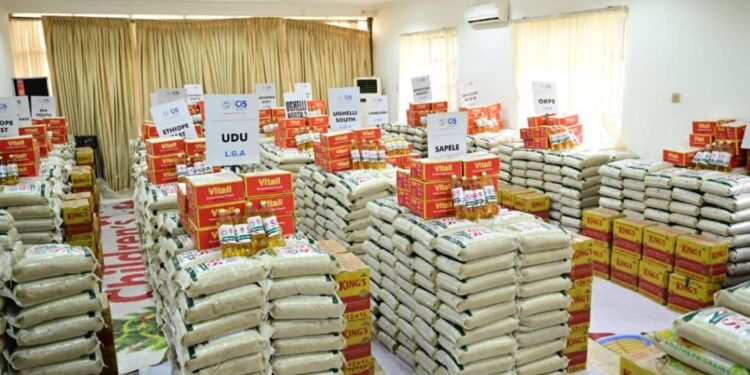 By Mercy Obojeghren
The Wife of the Delta Governor, Dame Edith Okowa, has distributed food items to 2,900 indigent women across the state, as part of activities to celebrate the yuletide.
Presenting the food items to the 29 candidates of the State House of Assembly under the Peoples Democratic Party (PDP) in Asaba, Dame Okowa said, “these food items may not mean much to you who are aspirants but it means so much to these women.
“We are not limiting the food items to widows alone, because there are women who are not widows but their cases are worse off.
“I plead with you to take the items, add whatever you can, based on your capacity and ensure that the items get to those for which they are intended.
“It is my prayer that the People’s Democratic Party (PDP) goes into the elections next year and returns victorious,” she said.
Responding on behalf of the candidates, the Majority Leader of the State House of Assembly, Chief Ferguson Onwo, said that the items would go a long way in alleviating the suffering of the less privileged.
“We want to really commend the wife of our amiable governor who always has the heart to reach the vulnerable”.
In the same vein, the candidate for Ughelli North 1 Constituency, Jimmy Idiovwa, commended the governor’s wife for her promptness.
“Since the commencement of my journey as an aspirant, this is the highest privilege I have witnessed, being invited by the governor’s wife for such a noble cause”.
The items distributed included bags of rice, cartons of tomato pastes and vegetable oil.
The News Agency of Nigeria (NAN) reports that this is the eight year the ‘O5 Initiative’ founder is reaching out to indigent women from across the state during the festive season.
In the previous years, she reached out to the women through the wives of local government council chairmen, but decided  to hand over the items to the candidates for onwards distribution.
NAN reports that the candidates were in the governor’s wife office to receive the items for onward distribution to 2,900 indigent women, one hundred from each state constituency.
(NAN)
Tags: Delta governmentEdith OkowaGovernor Ifeanyi Okowa

CAN Rejoices with Sultan, Muslims at Sallah