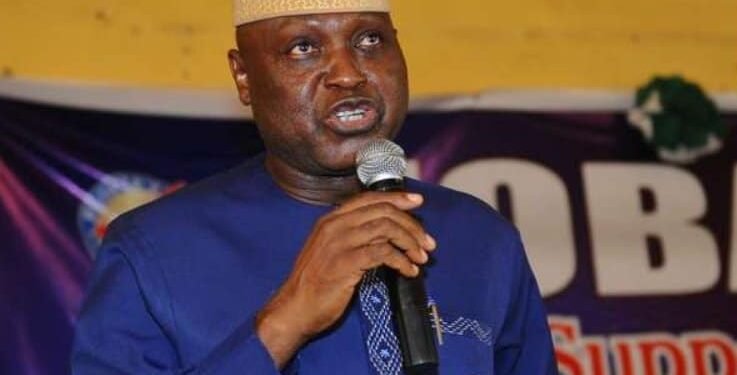 Governor Biodun Oyebanji of Ekiti State has called on residents of the state to support the presidential ambition of Sen. Bola Tinubu,   candidate of the All Progressives Congress party (APC) for 2023.

Oyebanji made the call while speaking at the Ward 4 meeting of APC in Ado-Ekiti on Friday.

The News Agency of Nigeria (NAN) reports that the governor, who came into the ward meeting unannounced, was welcomed with songs by excited party members.

Oyebanji said he had made a commitment to Tinubu that Ekiti would deliver the highest percentage of votes after Lagos State.

He urged party members to mobilise massive votes for the APC candidate in order for the party to retain the presidency.

According to him,the emergence of Tinubu in the 2023 will bring a lot of dividends to the state in terms of development and welfare of the people.

“What Asiwaju’s (Tinubu’s) votes mean for us are numerous because I have spoken at length with him on issues concerning Ekiti and I told him that Ekiti will deliver highest percentage of votes in the southwest after Lagos.

“He looked at me and said,”if you achieve that, I will surprise you’.

“So, let us do what I have promised on your behalf. Let us mobilise and vote massively for our own Asiwaju”,he said.

Oyebamji added that Ekiti people have many good reasons to vote massively for Asiwaju Tinubu, whose daughter,he said , is married to an Ekiti man.

According to him,the APC Presidential flag bearer remains the most capable and most experienced of all the candidates

Oyebanji also canvassed support for all the candidates of the party for the state House of Assembly and National Assembly elections.

Speaking on appointments into his government,Oyebanji assured political leaders in the grassroots that their choices and recommendations would be respected while making political appointments.

He urged them to forward only the names of those who regularly attend ward meetings with them for consideration for appointments .

On the recent Supreme Court judgement affirming him as governor, Oyebanji told the gathering that he had nothing against his main challenger, Mr Kayode Ojo.

The governor said he was pleased with the fact that Ojo opted for legal option instead  of resorting to self,- help.

He urged Ojo to return to the party so that they would jointly develop the state and take it to greater heights.

“My people, let us unite ourselves, I appeal to you, Kayode Ojo is not my enemy, he remains my friend and my brother.

“The court case is over. I am going to reach out to him to remain in the party to enable us develop the state together.

“We need to unite the party because Asiwaju’s election is on the way, elections into House of Assembly, House of Representatives and Senate are on the way”,he said.

Earlier, the Ward 4 Chairman, Mr Tajudeen Babalola, commended the governor for attending the meeting,and for showing love for the party and the people.

Describing the governor as a grassroots politician, the Ward chairman stressed the importance of maintaining unity in the party.

Babalola said it would easy for APC to win elections with unity and support of members.

Group Says ‘Tinubu will Not Renege on His promises, if Elected President’

Buhari Under Fire for Releasing Presidential Plane to APC for Campaigns