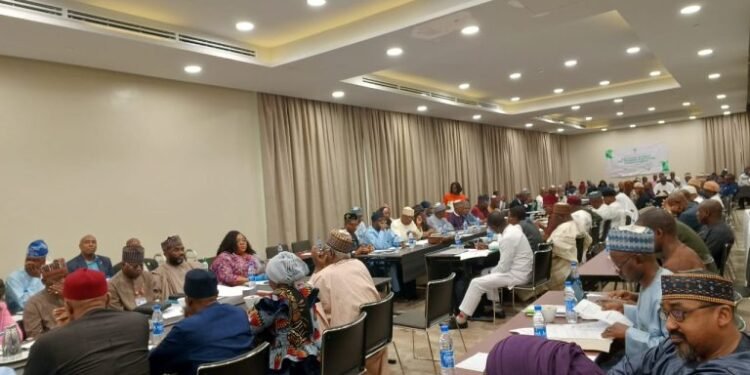 •The INEC event in Lagos

The Independent National Electoral Commission (INEC) says timely arrest and prosecution of perpetrators of attacks on its facilities and assets nationwide would end the trend.

The INEC Chairman, Prof. Mahmood Yakubu, said this at the opening of a two-day Induction Retreat for the commission’s Residents Electoral Commissioners in Lagos on Wednesday.

The News Agency of Nigeria (NAN) reports that the retreat is organised by the United Nations Development Programme (UNDP).

In his opening remarks, Yakubu said that in the last four months, five local government offices of the commission were attacked by unknown persons.

According to him, critical facilities and assets are lost to those attacks, hence the need to curb the trend urgently.

He said: “These facilities including a total of 1,992 ballot boxes, 399 voting cubicles and 22 electric power generators as well as thousands of uncollected PVCs (Permanent Voter Cards) among many other items.

“These attacks must stop and the perpetrators apprehended and prosecuted. Our responsibility is to conduct elections. The best solution for us is the arrest and prosecution of perpetrators.

“The ultimate solutions are the arrest and prosecution of the culprits so that vandals and arsonists do not feel that bad behaviour is acceptable in our country. It is really very sad as elections approach.

“However, I want to assure Nigerians that we will recover from these attacks, those materials will be replaced, but there is a limit to our ability to keep replacing lost items with just 86 days to the general elections.”

According to him, the commission will continue to work with the security agencies, traditional and community leaders and all well-meaning Nigerians to stop the attacks.

He said that INEC was committed to ensuring that nothing would stop the elections from going ahead as scheduled ,”and the will of Nigerian people will prevail. That is what we have been assuring Nigerians about.”

On the retreat, Yakubu said that it was part of the preparation for the 2023 general elections.

“We are having a retreat involving all the Residents Electoral Commissioners as we are aware 19 of them were sworn in about four weeks ago.

“We felt that there should be an induction retreat for them to familiarise themselves with the processes and procedures because the election is holding in the next 86 days,” the INEC boss said.

Yakubu said that the retreat would also dwell on standard operating procedures on the collection of PVCs, guidelines to voters distribution to polling units, framework for electoral logistics and code of conduct for commission’s members, officials and staff.

Yakubu said that copies of code of conduct for members, officials and staff would be made available for all.
He added: “I want to reiterate that our success ultimately depends on our integrity. We should remain independent and impartial.

” All political parties have equal standing before the commission. The choice belongs to Nigerian citizens, the electorate.

“Our responsibility is to uphold the sanctity of the ballots, nothing more and nothing less,” INEC boss said.

Speaking on rumour that voters could vote without PVC on election day, Yakubu described such as “absolutely incorrect”, saying “for any person to vote, he or she must be a registered voter, issued with the PVC.

“The commission has consistently maintained a policies that ‘no PVCs, no voting. Nothing has changed. It is a legal requirements and doing otherwise will be a violation of the law.

“I urge Nigerians to ignore those suggestions that a person can vote on the election day without a PVC,” he said.

Commending UNDP for supporting the retreat, Yakubu said that the long standing partnership with INEC had gone a long way in sustaining the implementing progress being witnessed in the electoral processes.

In his goodwill message, Mr Deryck Fritz, the Chief Technical Advisor, UNDP, urged the RECs to effectively implement the policies of the commission and be proactive frontline problem-solvers.

“It is you that must foster the critical local relationships and partnerships with civil society organizations, with the state administration, with the transport unions, with other service providers, and with the police and other security services.

“In this period of the World Cup, we are reminded that successful elections, like successful football matches, are a result of cooperation and teamwork,” Fritz said.
According to him, for many, the recent trajectory of improved electoral management is viewed as irreversible, but as is the case in any election, opposing forces persist, such as marketplace politics and security challenges.

He said that these challenges would test the robustness of the INEC processes and procedures, and the commitment of its staff.

He said that democracy, in many parts of the world, was under threat, adding that only with strong institutions would such threats be resisted and repelled.

“And where questions arise regarding the conduct of the process, or allegations of electoral mismanagement or even fraud, it is critical that trusted and competent mechanisms exist to address these concerns, as an important alternative to electoral violence and political instability.
“INEC as the constitutionally mandated body, must be and also be seen to be the impartial and neutral arbiter of the electoral contest,” he said.
NAN reports that the retreat has in attendance all the INEC Residents Electoral Commissioners and top management staff of the commission.

The Enugu State Police Command says it has concluded an investigation into the case of the alleged murder of 9-year-old...

OPINION | Why Were the Heads of CBN and INEC Under Siege from Security Agencies?, Asks Magnus Onyibe

2023: INEC will hold elections despite attacks on facilities – Mahmood Yakubu

2023 | Buhari to INEC: You Must Not Fail Nigerians — I’ve given you all you asked for