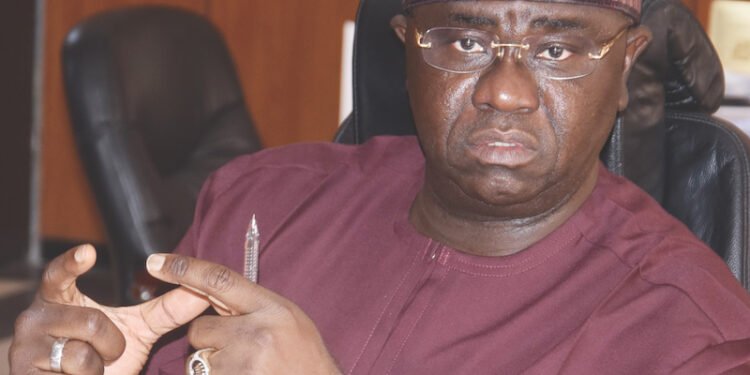 The Federal Government of Nigeria (FGN), Wednesday named Sokoto and Bayelsa states as poverty capitals on the country. The federal  government also accused state governors off misapplying resources at their disposals.

The FGN made the claims in Abuja during an interactive session the Minister of Budget and National Planning (State), Prince Clem Ikanade-Agba had with newsmen.

Ikanade-Agba chastised the governors, whom he accused of building flyovers and airports to the neglect of their citizens’ welfare needs.

Briefing State House Correspondents on the outcome of the meeting of the Federal Executive Council (FEC) presided over by President Muhammadu Buhari at the Presidential Villa, Abuja, Ikanade-Agba stated that 72 percent of the poverty in Nigeria is found in the rural areas, which he said had been abandoned by governors.

Recall, Governor Nyesom Wike of Rivers State, had penultimate week, disclosed that President Buhari had paid all the outstanding due to the oil-producing states as shortfall from the 13% derivation funds.

Wike had added that part of the money paid by the Buhari administration was what he had been using to execute the numerous projects his administration had executed in the state and which earned him the sobriquet of “Mr. Projects”.

Delta State had in reaction claimed that it had only received the sum of N14.7 billion as refund from the 13 per cent oil derivation in three quarterly installments of N4.9 billion each. It added that the actual shortfall due to the state was N250 billion, which the Federal Government agreed to pay in quarterly installments for a period of five years.

The Edo State government, while reacting  to Wike’s claim, said that it only got a total of N2.1 billion paid in three installments of N700 million per quarter.

The state had also while responding to former Edo State Governor, Adams Oshiomhole raising questions on the issue of financial matters, accused him of meeting N14 billion debt, receiving over N1 trillion as allocations in eight years but left a debt of N160 billion when he completed his two terms.

According to Ikanade-Agba, the governors prefer to function in the state capitals building skyscrapers, flyovers and airports rather than build roads that will aid farmers in the rural easily evacuate 90 percent of farm produce to the city, saying 60 percent of harvest is lost because it doesn’t make it to the market.

Agba, while noting that the federal government on its part has done its best on poverty alleviation, regretted that there is no reflection of the amount of investment that had been done in the area.

He pointed out that while states are in charge of land for agriculture, they do not invest in them for the desired effect on their rural citizens.

He therefore advised the state chief executives that rather than concentrate attention on the building infrastructure that are not necessary nor impact the common man, they should focus on initiatives that can pull the majority of the people out of poverty.

The minister said: “Question was, what is the Minister of Finance and I doing with regards to hardship in Nigeria, right?

So the suggestion is that both of us are the ones creating the hardship and it has to take two of us to resolve it.

“In the first place, I just returned this morning from Brussels where 106 countries, 27 countries from Europe and 79 countries from the Organization of African Caribbean and Pacific countries. What was the deliberation on? Basically on how should the world over tends to do around food and energy and energy crisis.

“I think that it’s always good for us to put things in the right perspective. Like I say to people, when you say government, we should be able to specify which government we are talking about. Is it a federal government? Is it a state government or is it a local government? Because we all have different responsibilities. And it is for this reason that we last year started some work on the multi-dimensional poverty index, for which we recently released the report and it was lunch by Mr. President.

“To say in the past, we’ve always looked at monetary poverty. But poverty like we know has different indices, different intensity and different causes. And it is for this reason, I went around the 109 senatorial districts in Nigeria, to carry out those survey and to be able to say specifically, where this hardship is.

“The result clearly show that 72% of poverty is in the rural areas. It also showed clearly, that Sokoto state is leading in poverty with 91%. But the surprising thing is Bayelsa being the second in terms of poverty rating in the country. So you see the issue is not about availability of money. But it has to do with the application of money.

“In the course of working on the national development plan, we looked at previous plans and say why they didn’t do as much as was expected. We also looked at the issues of the National Social Investment Programme of government.

“At the federal level, government is putting out so much money but not seeing so much reflection, in terms of money that is being put in alleviating poverty, which is one of the reasons the government also put in place the National Poverty Reduction with Growth Strategy.

But if the federal government puts the entire income that it earns into all of this without some form of complementarity from the State governments in playing their part. It will seem as if we are throwing money in the pond. Because the governors basically our only functioning in their state capitals. And democracy that we preach about is delivering the greatest goods to the greatest number of people. And from our demographic, it shows that the greatest number of our people who live in rural areas, but the governors are not working in the rural areas.

“Right now, 70% of our people live in rural areas they produce 90% of what we eat and unfortunately 60% of what they produce is lost due to post harvest losses and it does not get to the market.
“When we talk about food prices, like I mentioned right now as driving inflation, prices of food at the farm gates are low.

But when you now take it to the urban areas, you find out that the prices are high due to supply chain disruptions, lack of infrastructure to take them there.
“I think from the federal government side we are doing our best. But we need to push that rather than governors continuing to compete to take loans to build airports that are not necessary where they have other airports so close to them. Or governors now competing to build flyovers all over the place and we applaud them, they should concentrate on building rural roads so that the farmer can at least get their products to the market. And you find that if they do that and with the new policy in the national development plan that talks about taking power to the rural areas, especially of out-grid power that can easily be put, you begin to attract industries to those areas for value addition.
“UNIDO report shows us in terms of employment, the MSMEs employs 70% of our people. So you can imagine how much progress we will make when you find that there are roads, there is power in these rural areas.
“In terms of agriculture, you find out that the federal government doesn’t have a land that they would plant, government has pushed for the Anchor Borrowers programme and that is going on very well but the state control lands. The states are the ones to provide land for agriculture. They are not investing in that. They would rather build skyscrapers in a city where people will see and clap but the skyscrapers does not put food on the table.
“Like I always say, if you look at the Abraham Maslow’s hierarchy of needs. He says you have to take care of the basic needs of individuals first before you begin to talk about self actualization.
“So we need to take care of the issues of food, nutrition, housing and clothing for our people. Before we begin to think of how to go to the moon and begin to build flyovers and airports in the state capital, that is the missing link which we need to push so that we’ll be able to catalyze growth.
“But continuing to say federal government or my sister, Zainab and I what are we doing? We are doing our parts. And I’m sure Wike told you guys about monies that have been released over N500 billion to the oil producing states and I’ve seen some disclaimers from the states saying, it is small small money they are getting on a monthly basis. And some are giving some half truths of what they have received. We need to hold them accountable. So that together we all can grow our economy.”

The Integrity of God’s Word… (lll)