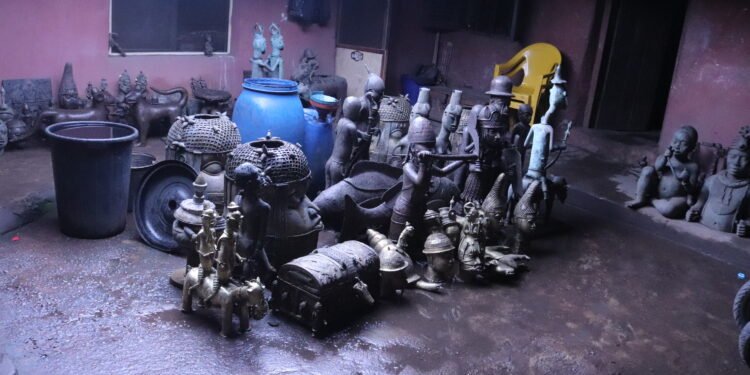 The most topical issue in the art world as it pertains to Africa is rooted in antiquity.

In 1897, the British Army raided the Benin Kingdom in a so called “punitive expedition” following the killing of James Robert Phillips, a British official and others. The Oba of Benin, Oba Ovọnramwẹn Nọgbaisi was deposed and exiled, and members of the British Army set about pillaging the Kingdom’s cultural and religious artefacts, and artworks.

Some of the booty, collectively known as the Benin Bronzes, was auctioned off to cover the cost of the mission, some others ended up in private collections, and a sizable collection ended up in museums.

Over the years, pieces from the Benin Bronzes have dispersed across the world, ending up in private collections and museums in Europe and America. A century and a quarter later, the Binis are still fighting to right the injustice done to them. They have called for the return of their artefacts for decades, but in the last decade or so, especially with the impressive cultural diplomacy of the Benin Dialogue Group with strong support from the current monarch, Oba Ewuare II, the tide seems to be shifting.

Institutions across Europe and the United States have either returned or pledged to return pieces of the Benin Bronzes in their collection. A few museums are resisting, citing extant provisions which permit the disposal of objects in its collection only in very limited circumstances.

While international law provides for the restitution and return of stolen art, the gaps in available laws mean that the Binis may have to rely not on law but on “good conscience” for the return of the Benin Bronzes. As evident in the actions in support of returning World War II era assets, such good conscience exists in the international community.

For many years, those who have resisted the calls have made the tenuous argument that the artefacts would not receive proper care if returned to Nigeria and other sites where they were stolen from. That argument is no longer tenable.

A New Home for the Benin Bronzes

READ ALSO  Your Transformational Agenda Next to None, Earl Osaro Hails Obaseki

The Royal Benin Museum is conceived by the Oba of Benin and is intended to house the Benin Bronzes which are being returned piecemeal even though institutions from Germany to the UK and the US have committed to return nearly 1,400 pieces.

A consideration of the sheer number of objects to be returned, an estimated 5,240 objects tracked down to 131 separate collections in the West, bears out the wisdom in setting up a culture district and refurbishing older museums.

It also highlights the imperative of not-for-profit initiatives like the EMOWAA Trust’s Museum and surrounding facilities; one of which will provide extensive storage space and will serve as a research and education center. It will be a creative hub for  contemporary creatives in Africa as well as a place to celebrate and study cultural heritage. EMOWAA will be owned and operated by a private trust, and has the support of diverse stakeholders including the Edo State Government, National Commission for Museums and Monuments of Nigeria, and others.

The Benin Bronzes will therefore have several homes upon return. All that is left is for those in possession of the looted cultural heritage of the Binis to come to the table with “good conscience” and work out the details of their return. And to facilitate this we have the example of the immense communal and private losses suffered by European Jews during World War II to guide us.

The law provides remedies to give justice to persons who have been wronged. These remedies are available for both civil and criminal wrongful acts.

The terms “restitution” and “return” have evolved over time and now represent two different concepts in the field of cultural heritage disputes. The distinction in terms recognizes the hardship in trying to use legal tools to settle these disputes. “Restitution” is available as a remedy to victims of a legal violation, namely fraud, looting, and theft. With restitution, the victim is entitled to full restoration based on the wrongdoer’s gain at the victims’ expense i.e., the wrongdoer’s unjust enrichment. Restitution can be achieved directly by returning the objects of the theft or pillaging, or, where the object no longer exists, indirectly, by giving objects similar to what was stolen. “Return” on the other hand, refers to objects taken during the colonial era or those illegally exported from one country to another. While International law seems comfortable with the “return” concept, “restitution” seems a more difficult nut to crack. It involves a lot more legal technicalities on which a claim may fail.

On 12th November 2009, the United Kingdom enacted the Holocaust (Return of Cultural Assets) Act of 2009. The purpose of the Act, which applies to several national institutions, empowers an Advisory Panel constituted under the Act, to recommend and approve the return of victims’ property. The Act, which initially had a “sunset clause” that provided for the Act to expire after 10 years, was amended in 2019. The Holocaust (Return of Cultural Assets) (Amendment) Act 2019 removed the sunset clause, in effect committing to the purpose of the Act indefinitely.

These instruments show that good conscience and law go hand-in-hand. Where there is a willingness to act on good conscience, the law does not stand in the way of action in the pursuit of justice.

From “Good Conscience” to a new paradigm

But beyond these, there are ongoing conversations on the continent around defining a framework for restitution. A powerful case in this regard was made recently by President Muhammadu Buhari of Nigeria in a Financial Times article where he riffed on accountability and action regarding the return not just of looted artefacts but also of illicit financial outflows.

According to the article, “In the case of both looted cultural heritage and stolen assets, western museums and authorities largely seem to agree that the loot should, in principle, be handed back. However, the technicalities of repatriation leave plenty of room for maintaining the status quo.”

Luckily, discussions around the subject of the Benin Bronzes have evolved from an outright unwillingness to return the property to its owners based on paternalistic arguments such as Nigeria’s (or the Bini’s) ability to be good stewards of the property to questions of finance and logistics.

The issue of where the Benin Bronzes will go and how they will be cared for in Nigeria is no longer in  question especially with the National Commission for Museums and Monuments (NCMM) in the vanguard of ongoing negotiations on behalf of Nigeria.

Public and private initiatives like the Royal Benin Museum and EMOWAA have also provided answers to those questions.

. •Presidential candidate of the Peoples Democratic Party and former Vice President of Nigeria, Atiku Abubakar raising the hand of...