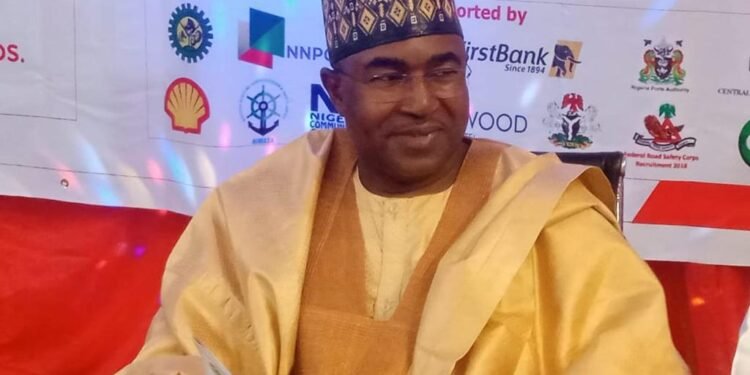 The Chairman/Chief Executive Officer of the National Drug Law Enforcement Agency, Brigadier General Mohamed Buba Marwa (retd), has charged parents and other stakeholders to rise up to the challenge of ensuring that illicit substances are kept away from young Nigerians, warning that complacency is capable of compromising the bright future ahead of the youth population.

He said: “Let me leave us with a thought-provoking submission about the danger of complacency in tackling drug abuse among youth.

“By 2030, demographic factors project the number of people using drugs to rise by 11 per cent around the world, and as much as 40 per cent in Africa alone.

“This is an early warning that we should all take serious and ensure that we keep our young people away from dangerous substances that compromise the bright future ahead of them.”

Marwa said instead of benefitting from the advantages of the huge youth population in Nigeria, the reverse may be the case if relevant stakeholders fail to stand up and join ongoing efforts against the drug scourge.

His words: “It is globally recognised that one of Africas comparative advantages is its huge youth population.

“This country, Nigeria, for instance, has no less than 151 million young people, accounting for 70 per cent of our estimated 217 million population.

“Most of us don’t know what that means.

“But how do we rake in these benefits when a significant number of this population is involved in the abuse of illicit substances?

“The truth is instead of a boon they could become a burden because of abuse of illicit substances.”

Marwa said in response to whole-of-society approaches needed to ensure that people, young people most of all, have the information and develop the resilience to make good choices, especially as it relates to drug abuse, the NDLEA has initiated some youth focused measures to safeguard them against the pressures and temptations of going into drugs.

Such measures, he said, include War Against Drug Abuse campaign, “a grassroots-oriented advocacy which we are using to diffuse anti-drug sentiment across the various strata of our society; NDLEA Twitter Space where drug issues are discussed by experts from within the country and around the world to an audience of young people; a 24/7 Drug Abuse call centre with a toll-free helpline: 0800 1020 3040, which allows drug users, their families and employers to seek treatment without compromising their identities or safety, as well as open-door treatment at 26 NDLEA treatment facilities across the country.”

Marwa said this has become necessary following the release of the 2018 National Drug Use and Health Survey.

According to him, Nigeria has been seeking solutions to the drug scourge, especially as it pertains to youths.

The administration of President Muhammadu Buhari gives NDLEA unflinching support, he said, adding that the Agency in turn has been working on several measures, which are largely youth-focused.

Speaking earlier at a debrief workshop on Controlled Delivery Exercise of Drug Trafficking for Law Enforcement in Nigeria and Cote D’Ivoire organised by the United Nations Office on Drugs and Crime, UNODC and ECOWAS Commission, General Marwa noted that the capacity building training has further increased efficiency in tackling the scourge of drug trafficking, which in recent years has become one of the most devastating threats to the human race.

He said: “Today’s workshop has helped to put us all on the same page about the intricacies of this methodology, which requires greater cooperation of relevant law enforcement agencies at the national and international levels.

“More than other techniques, controlled delivery sharpens our awareness as to why law enforcement agencies should not work in silos and why bilateral and multilateral agreements, good and regular contact and exchange of information between anti-drug enforcement organisations are important.”

He commended the European Union, UNODC and ECOWAS Commission for supporting the training workshop.