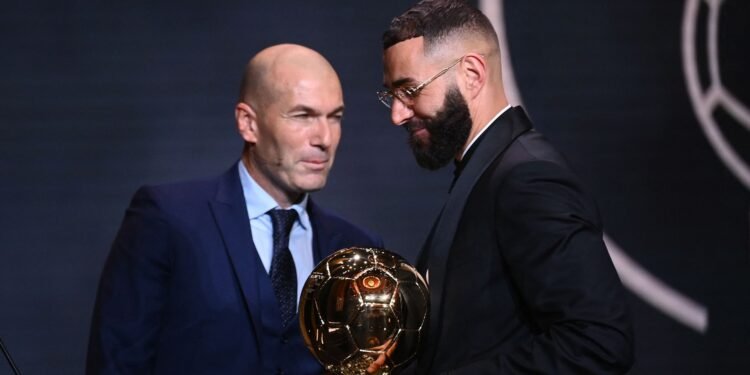 John Skilbeck
October 17, 2022 21:04 MYT
Perhaps there’s something in the notion of a lucky Shamrock. Thirteen years on from making his Real Madrid debut in a friendly against Shamrock Rovers, Karim Benzema is the world player of the year, a richly deserving winner of the Ballon d’Or.
It was Cristiano Ronaldo who topped the bill at a jam-packed Tallaght Stadium in July 2009, having joined Madrid from Manchester United, but substitute Benzema was the matchwinner that night, a late goal delivering a 1-0 victory for Los Blancos.
He kept winning, and winning some more, even when others took the spotlight, but the winning has been almost unrelenting. And that has been the theme of his career.
Benzema had won four Ligue 1 titles with Lyon before, at the age of just 21, he earned himself a move to Madrid, where he has won five Champions League titles, four LaLiga crowns, four FIFA Club World Cups, four European Super Cups, four Spanish Supercopas, and two Copa del Rey winner’s medals.
Now 34-year-old Benzema is harvesting the personal acclaim, having long played the patient consort to the garlanded Ronaldo and, even, Gareth Bale.
As he ascends to this particular throne, Stats Perform has looked at how Benzema reached such a high point, and what the Ballon d’Or result means in wider terms.
Brilliant Benz merks his rivals
This time it had to be him. The Karim of the crop. Last year, it was hard to distinguish what was more embarrassing: the constant campaigning for Benzema to take the Ballon d’Or by Real Madrid luminaries past and present, or the fact Lionel Messi took the prize again, ahead of Robert Lewandowski.
Messi’s seventh Ballon d’Or felt like a long-service award. Benzema’s triumph is both that, and a reflection of the greatest season of his career.
The Ballon d’Or rules shifted this year, with the time span set from August 1, 2021, to July 31, 2022, rather than the calendar year.
In that time, Benzema, more often than not as captain, hit 44 goals in 46 games, with his shot conversion rate at a career high of 24.18 per cent.
He scored 27 of those goals in 32 LaLiga games to earn his first Pichichi – the award that goes to the league’s leading scorer – and in doing so led Madrid to the title.
Messi won the Pichichi eight times, while Ronaldo took it on three occasions, with Luis Suarez (2015-16) the only other player to lay his hands on the trophy in the seasons from 2009-10 to 2020-21.
Benzema’s league goals came at a rate of one every 96.15 minutes, which he has bettered only once in Spain (2015-16: 24 goals in 27 games, one goal every 83.04 minutes). Significantly, he was a provider in the league too, weighing in with a career-best 12 assists.
His 15 Champions League goals in Madrid’s glorious campaign came from 12 games, at one goal every 73.73 minutes. He vastly surpassed his expected goals tally of 8.2, the metric that reflects the quality of a player’s chances and likelihood of scoring.
He has made a career of exceeding expectations. When he made a €35million switch from Lyon all those years ago, not even Benzema could have imagined he would be peaking in his mid-thirties.
Benzema also drew level with Raul’s haul of 323 goals for Madrid last season, going joint-second on the club’s all-time list, behind only Ronaldo (450).
Second place has since become Benzema’s outright, with the goals still coming. He probably won’t catch Ronaldo, but he might not be far behind.
No longer a young man’s game?
With Benzema landing the award just two months before he turns 35, it is another example of the younger generation not yet doing enough to challenge the old guard.
The last player aged under 30 to win the Ballon d’Or was Messi, who took the 2015 award.
Kylian Mbappe might have been a reasonable shout this time around, if Paris Saint-Germain had not perished against Madrid and Benzema in last season’s Champions League, but the other serious challengers were on the top side of 30: the likes of Lewandowski, Kevin De Bruyne, Mohamed Salah and Sadio Mane.
Next year is likely to be a different story, with Mbappe and Manchester City’s Erling Haaland surely pushing for the trophy. The World Cup could also be impactful on the 2022-23 vote, and Qatar 2022 might yet bring Benzema more glory with France.
•Culled from Stadiumastro.com
Tags: AlgeriaBallin d'OrKarim BenzemaReal MadridZinedine Zidane

By Olawale Alabi   The Super Eagles failed to hold on to their early lead on Tuesday in Oran to...