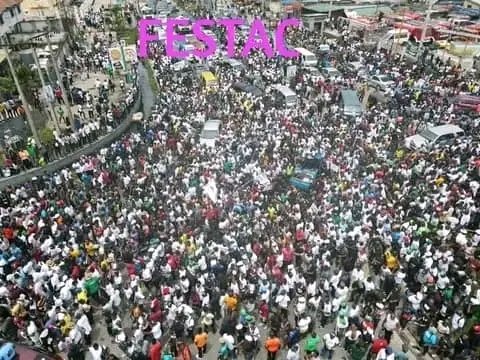 •The march on Festac by OBIdients

The OBIdient movement across major cities in Nigeria on October 1 with impressive Million-persons’ marches to announce loudly their support for the Presidential Candidate of the Labour Party, Mr. Peter Obi.

The OBIdients were seen in their thousands in Kaduna, Bauchi, Gombe, Warri, Asaba, Benin City, and at the following centres in Lagos State –  Surulere, Lekki, Ikeja, Festac, among others.

The News Agency of Nigeria (NAN) reports that all supporters and fans of Obi converged at the National Stadium for the political rally with long convoy and walked through Ikorodu road before terminating the rally at Maryland (Freedom Tunnel). The massive crowd grounded free flow of traffic on Ikorodu road as they hoisted various banners and chatted various solidarity songs to seek support for Obi and other LP candidates in the 2023 general elections.

It was gathered that Obi’s  supporters also converged at Ikeja, Lekki and Amuwo-Odofin in large numbers to drum support for the former Anambra governor.

Leading the rally, Oputa said it  was to awaken the consciousness of Nigerian youths on the need to be involved in decision making processes for good governance.

“This rally talks about good governance and active citizenship. Young people are partially to be blamed for the challenges in the country,  because they have been a little bit docile and felt unconcerned.

“Like I keep saying, we cannot leave politics to the politicians alone, it is not possible. But I am glad that at least in my life time, I am seeing young people’s consciousness reawakening.

“For me personally, it is about good governance because whoever wins, if young people are still not committed to holding them (political class) accountable, will go to the old ways. So, I am impressed with the turnout.

“Of course, I am sympathetic toward Labour Party and Obi, but this march is about good governance and active citizenship. The future belongs to young people and they should take charge,” Oputa said.

Addressing the supporters at Maryland, Mr Olukayode Salako, the Lagos State Chairman of LP said that the rally had brought a huge joy of fulfilment to his heart and labour party family.

Salako said that with the huge turnout of youths for the rally, the party was sure of delivering massive votes to Obi and take over leadership in  Lagos state in 2023.

He urged all the teeming supporters to ensure that they collected their Permanent Voter Cards (PVCs) and continued to  mobilising people at the grassroots for the Labour Party.

According to him, the LP governorship candidate in Lagos state,  Mr Gbadebo Rhodes-Vivour is ready to make Lagos work more for all residents as against a  few political class.

He said that the rally was organised in collaboration with independent support groups, civil liberty organisations, social crusaders and fans of  the OBI-DATTI presidential project.

Also speaking, Bishop James Okocha, President, Christian Ministers Universal Forum and Vice President for Initiative for Better and Brighter Nigeria (IBBN) said: “We join this rally because we have been dreaming of a nation we can proudly call our own.

“When we look at the resources we have, we believe if we have the right leadership, things will turnaround for better for all citizens from North to South.

“We see Obi as someone with competence, capacity and character to lead us to greater heights.”

Also speaking, Mr Wale Okunniyi, a civil activist and one of the leaders of the National Consultative Front (NCFront), described the turnout as impressive, urging the supporters to go from house to house mobilising for Obi.

Okunniyi said that the rally again showed the reality of Peter Obi’s emergence as a strong political force and leader to reckon with in the forthcoming general elections.

He said that the unalloyed solidarity movements and bandwagon of support-base had continued to sweep across popular cities in the country, like a tsunami.

He said that the peaceful  march was a conscious opportunity to sensitise Nigerians across board of the reasons why Peter Obi remained an ideal leader for the country at this point of Nigeria ‘s national life.

Others are: Initiative for a Better and Brighter Nigeria, Obedient-ALUTA Support Group, Peter Obi National Support Group and  Peter Obi Movement among others.

At Asaba, thousands of Labour Party (LP) supporters known as “Obidients” on Saturday shut down Asaba, the Delta capital, during a rally to drum support for its 2023 Presidential candidate, Mr Peter Obi.

The rally, tagged, “One million-man march for Peter Obi,” took Asaba by storm as the supporters marched down major roads, as the residents celebrated the nation’s 62nd independence anniversary.

All major roads in Asaba witnessed gridlocks while motorists and other road users groaned over the traffic jam.

The crowd of supporters marched along the popular Nnebisi road in the heart of the town down to the Inter-bua roundabout, chatting solidarity songs in support of Obi.

READ ALSO  2023: Factors Nigerians should Focus on in Selecting their Leaders, by Peter Obi

The News Agency of Nigeria (NAN) reports that the Labour party supporters mainly youths were drawn from across the 25 LGAs of the state.

A supporter, Mr. Festus Edomoro, told NAN that he came all the way from the riverine community of Patani to participate in the rally meant to draw support for Obi’s 2023 presidential bid.

“We are here today to draw support for our candidate, Mr. Peter Obi. He is the new hope for a better Nigeria.

“I came all the way from Patani to be part of this mega rally, and I am happy to be here. I desire a new Nigeria, and Obi is the face of a new Nigeria,” Edomoro said.

A commercial motorist, Mr Chiedu Okoh who took part in the rally, told NAN that he was confident of the victory of Mr. Peter Obi at the poll.

“I abandoned my daily ‘hustling’ today to be part of this rally. As you can see, everyone is yearning for Obi, so I can’t be different.

“As a nation, Nigeria has come a long way and this is the time for us to make a choice. Obi is our choice out of those jostling to be president.

“You can see for yourself that Nigerians are tired of the old politicians. This is the time for a change and Obi represents the change,” Okoh said.

In the meantime, Labour Party Support Movement (LPSM) said on Saturday in Abuja that it would use its vast network to mobilise voters towards Peter Obi’s success in the 2023 presidential election.

Inaugurating the group, Mr Chuks Ezurike, its Director- General, expressed the commitment of the group to bringing the Labour Party to higher political prominence.

Alhaji Tijani Abubakar, the National Secretary of the movement described Obi as a man of integrity in the management of fiscal and human resources.

Abubakar, who advocated increased national support for Obi, said Obi has the capacity to rescue Nigeria from its economic and security challenges.

“Obi exemplified prudence in resource management by leaving billions of dollars for Anambra State when he left office as governor.

“He will provide security of lives and property with his in-depth administrative knowledge and skill,” Abubakar said.

Mr Peter Diegwu, Labour Party (LP) Chairman, FCT asserted the capability of the party to take power by 2023 with a crop of young men and women.

Diegwu expressed optimism on the possibility of LP producing the next president of Nigeria with its grassroots base.

The News Agency of Nigeria reports that the highlight of the event was the inauguration of State Coordinators across the 36 states of the Federation.

By John Alechenu, Abuja The Presidential Candidate of the Labour Party, Mr. Peter Obi, and his running mate, Dr. Yusuf...