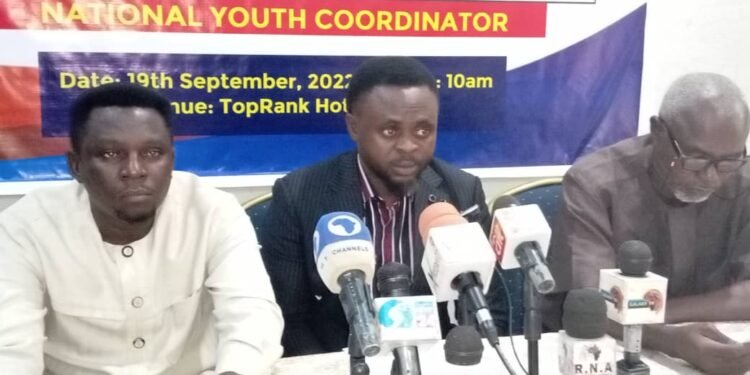 …
The All Progressives Congress APC Youth and Solidarity Forum has thrown its weight behind the nomination of Governor Yahaya Bello of Kogi as the National youth coordinator of the party’s campaign council ahead of the 2023 Presidential polls.

The group also vowed to mobilize 25 million youths for the party ahead of the election.

The Group’s National Coordinator,  Joseph Ukpoju who addressed the media in Abuja said Yahaya Bello’s nomination is indeed a strategic move by the leadership of the APC in identifying the political dexterity and followership of the Governor across the country to serve as the National Youth Coordinator.

Ukpoju said Yahaya Bello remains a man whose actions resonate with the teeming youthful population in the country. He represents a paradigm shift in youth inclusiveness in governance in the country.

“The strategic import of the appointment of the young and energetic Yahaya Bello cannot be overemphasized. Over the years, he has demonstrated capacity and a commitment to bring the teeming youthful population in Nigeria to the mainstream of governance in the country.

He said that Governor Yahaya Bello is well deserving of the appointment due to his leadership style as a time-tested youth mobilizer in the country.

“This much he has demonstrated in several capacities over the years, and the results have been outstanding.

“We wish to use this medium to pledge our continued support to the Tinubu-Shettima 2023 Project by mobilizing at least 25 million youths across the country to vote massively for the APC during the presidential elections.

“We are also buoyed by the fact that we have, as the National Youth Coordinator, a man the teeming youthful population in the country looks up to as a role model. We also do not doubt the ability of Governor Yahaya Bello to galvanize the votes of the country’s youths for the APC in the 2023 presidential elections.

“Our special commendation goes to the APC presidential candidate, Asiwaju Bola Ahmed Tinubu, for identifying with the youths in the choice of Governor Yahaya Bello as the National Youth Coordinator of the Presidential Campaign Council.

“It is our considered opinion that with Governor Yahaya Bello, the APC should rest assured that the youths of the country would rally behind the APC towards delivering electoral victory at the polls.

“The appointment of Governor Yahaya Bello could not have come at a better time than now. He is a tested, accepted and patriotic youth of the country who has mentored and continued to mentor millions of youths across the country.

“The APC indeed got it right and would do well to be ready to receive the support of millions of youths across the country as we begin preparations for the 2023 presidential and general elections.

“The APC Youth Solidarity and Development Forum leadership wishes to use this medium to encourage Governor Yahaya Bello to hit the ground running in his characteristics manner. As a matter of urgency, he should reactivate his wide networks across the country to bring the teeming youthful population into the APC family.

“We also charge him to see to the coming together of all APC Youth Groups to collectively champion the Tinubu-Shettima 2023 Project towards a resounding victory at the polls.

“The leadership of the APC Youth Solidarity and Development Forum congratulates Governor Yahaya Bello for this worthy appointment and assures him that he has our support to deliver on this critical national assignment.

Thank you for your time and attention” he added