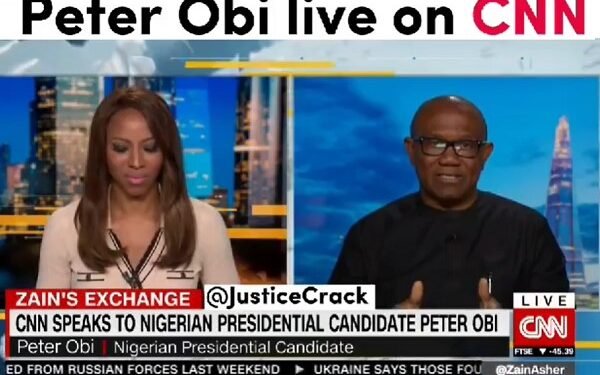 Peter Obi:  Well, a variety of things. One, is that we have to deal decisively with the issue of insecurity. It’s impacting negatively on our economy. We have to deal with it head on. We have to get our finances right — and start ensuring that the vast lands of the north are invested in and cultivated. We have to start pulling people out of poverty as quickly as possible. We have to immediately reduce aggressively, the cost of governance, and the issue of corruption.

Peter Obi:  Well, if you have a leader that is competent, has the capacity and commitment to start dealing with these challenges, you’re not going to solve it overnight, but there will be a clear, visible, measurable attempt to deal with these. And there is nothing that is not solve-able. Some issues just have to be dealt with decisively. But you need to have a capable leader such that when you look at his past records in office, you can say YES – He is capable.

Zain Asher:  If you do, indeed, become Nigeria’s next president, Nigeria you know, is broke. It’s barely able to service its debts. It spends so much more that it earns. What are your plans? From a concrete perspective, what are your plans to take Nigeria’s economy off of life support?

Peter Obi:  Well, a variety of things. One, is that we have to deal decisively with the issue of insecurity. It’s impacting negatively on our economy. We have to deal with it head on. We have to get our finances right — and start ensuring that the vast lands of the north are invested in and cultivated. We have to start pulling people out of poverty as quickly as possible. We have to immediately reduce aggressively, the cost of governance, and the issue of corruption.

Zain Asher:  Anyone who knows anything about Nigeria knows that it has this embarrassing reputation of importing refined fuel, despite the fact that it’s Africa’s largest oil producer. What is your plan for transforming Nigeria’s economy from a consumption economy to a production economy?

Peter Obi: Let me tell you it’s not the issue of refineries not working — there’s no reason why we should not encourage the private sector to operate refineries. It can be done as quickly as possible. We can today, decide to remove the oil subsidies, and use the resources to invest in and support the principal areas of production; from critical infrastructure to education, to supporting investment in refinery, which will be, done in the shortest amount of time.

Zain Asher: A lot of Nigerian presidents have come in and talked about revitalizing the manufacturing sector, investing in refineries, but change, as you know, has been very, very slow. Why is it going to be different with you and what would you say were the biggest hurdles in making sure that all of the things that you just listed come to pass?

Peter Obi:  Well, what people need to do is to look at what I promised as the state governor. When I said was going to turn around education, health, pull people out of poverty, bring sanity and civility in governance — did that happen or not?
When I said we were going to save money, did we do that? Yes, we did.

Peter Obi: Initially, what we first have to deal with is the issue of security. Unless you have security, the farmers can’t — you can’t have investment. Nobody will ever want to put or invest money in an insecure country. So we will deal this issue of insecurity decisively. We will start by reorganizing our security architecture. We will then bring in more hands into the security system, and motivate them properly, so that we can defeat the issue of insecurity . It’s the most important thing that Nigeria needs today.

Zain Asher: You and I are both Nigerians, we’re both from southeastern Nigeria. It’s a very hard country to hold together. You have to manage about 200 million people, with so many different tribes, so many different ideas. When you think about the fact that you are from the southeast, how easy is it going to be to rally Nigerians from the north behind you? That’s got to be on your mind?

Peter Obi: That was the situation obtainable in the past. We used to elect leaders based on ethnicity, religion, strong connection, etc, and that has brought us to the bad situation we are in today.

“Our structure”, the structure of criminality, is what we want to dismantle now. We want to ensure that the next election is based on character, capacity, competence, commitment to do the right thing.

Nigeria, not just in a fiscal mess, it is at the last stage to collapse. The people in the north don’t have a secure place, they don’t have good roads. They don’t buy bread cheaper than those in the South. The people in the south are facing the same issues. All what you hear about ethnicity, religion, connection, is an elite conspiracy to keep Nigeria undeveloped. But now we’ve reached the edge.

Zain Asher: Thank you for coming on our program.

Peter Obi: Thank you for inviting me.

"We will interrogate the issue of subsidy so detailed and know exactly what is happening. If some people drink...

Peter Obi to Nigerians: I Would Rather Die Than Fail My Supporters