APC Cause of Poverty, Hunger in Nigeria, Says Okowa 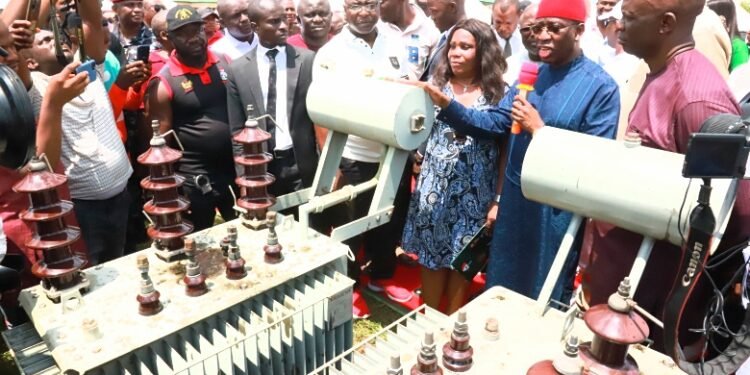 Governor of Delta and Vice-Presidential Candidate of the Peoples Democratic Party (PDP), Sen. (Dr) Ifeanyi Okowa, on Saturday said rising hunger and poverty in the country was caused by poor management of the nation’s economy by ruling All Progressives Congress (APC).

He stated this at an empowerment programme for the people of Ika Federal Constituency by the Member  representing the constituency at the House of Representatives, Mr Victor Nwokolo, at Boji-Boji Owa, Ika North East Local Government Area.

The Governor who was in company with the Speaker of the State House of Assembly and PDP Governorship Candidate in the state, Chief Sheriff Oborevwori and State Chairman of  PDP, Chief Kingsley Esiso, commended Nwokolo for his gesture in giving hope to the hopeless, describing the event as “empowerment programme with a difference”

He said that Nigeria was troubled because people were hungry and out of job due to mismanagement of the nation’s economy.

He added that even students were having lots of challenges because their parents could not meet their needs owing to the level of poverty resulting from ineptitude of the APC-led Federal Government.

Okowa, therefore, urged Nigerians to support the PDP, saying it was the only party with clear understanding of the nation’s challenges and had clear solution to rescue the nation.

“The important thing is that we know the issues troubling our nation and we have a clear pathway for rescuing and rebuilding the nation,” he said.

He commended Nwokolo for empowerment and noted that it was a show of love to the people and prayed that the beneficiaries would utilise the items and equipment for the common good of the people.

“I also pray that the students who benefitted from this gesture will  study hard and become successful for the good of their families and our people,” he stated.

Earlier, Nwokolo had said that his motive for the empowerment was to restore hope to the hopeless amid rising hunger and poverty in the land.

He commended Governor Okowa for providing leadership and for his efforts in empowering the people through the various entrepreneurial programmes of the state.