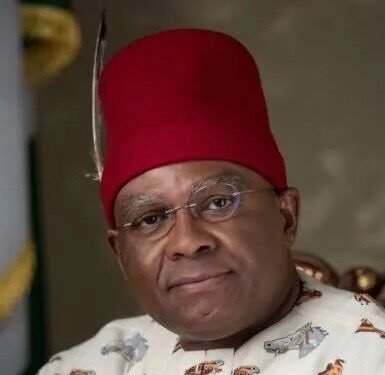 Former Governor of Enugu state, Dr Chimaroke Nnamani, has showered encomiums on the Nigerian press for remaining steadfast in the protection and promotion of democracy in spite of enormous challenges.

Senator Nnamani who represents Enugu East in the Senate in his goodwill message to Nigerians commemorating this year’s international democracy day noted that the press has been resolute as the critical pillar for the sustenance of Democracy in the country.

The United Nations ( UN) General Assembly in 2007 declared September 15 every year as Democracy Day to encourage governments to strengthen and consolidate democracy across the world .

The theme of this year’s Democracy Day is “importance of media freedom to democracy, peace and achieving the sustainable development goals” (SDGs).

Senator Nnamani said the day offers opportunity to discuss the state of Democracy in the country lamenting that Nigeria is currently ranked 129 out of 180 by reporters without borders, down nine spots from our ranking of 120 in 2021.

This he said is due to a variety of factors, including press safety, which is increased by harassment, pressure, and even threats to life as well as other factors like government censorship and influence over media contents.

He stated: “In order to improve our press freedom, we must create an environment where journalists can work most effectively.

They must sustain the indomitable spirit Nigerian press is known for over the years”.

Senator Nnamani cautioned: “Physical and online attacks on journalists will only make our country intolerable and impossible for us to live in; as a result, those who intend to harm or harass journalists off/online should instead take other constructive and enlightening approaches, such as offering a counterpoint that is insightful and constructive to their points of view.

“I must assume responsibility for reminding the media of their contributions to the development of the nation and pleading with them to continue steadfastly advancing media pluralism.

“By educating the public and empowering them to make better decisions, a diverse (pluralistic) media can hold good government accountable. To get a comprehensive perspective and avoid endangering our social and cultural variety, the press must be pluralistic in the information they produce. They must be sure to cover all aspects of a news story, both positive and negative.

“I honour all journalists who have given their lives for press freedom as well as those who have continued to produce and release materials in spite of the challenging circumstances they have encountered both online and offline”.

Senator Nnamani agreed with UN-Secretary, General António Guterres that freedom of the press is essential to democracy and that freedom itself cannot exist without freedom of expression.

He wishes Nigeria and Nigerians a happy Democracy Day.

The Malady of APC’s Foreboding Convention and Leadership Miasma