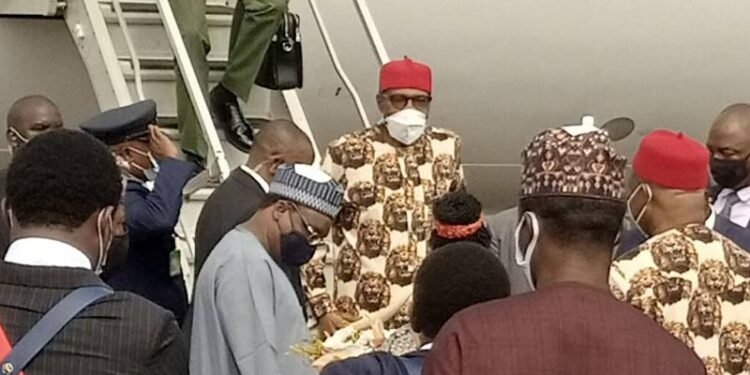 President Mohammadu Buhari has arrived at Owerri for Tuesday’s inauguration of some “signature projects” executed by Gov. Hope Uzodimma in his 32-month-old administration.

The News Agency of Nigeria (NAN) reports that the president’s plane touched down at the Sam Mbakwe International Cargo Airport, Owerri at exactly 10:46 am.

The president and his entourage were received by the governor, accompanied by some top state government functionaries.

Also at the airport to receive the president were some top security personnel and chieftains of the ruling-All Progressives Congress (APC) in the state and South-East zone.

On arrival, the president inspected a Guard of Honour mounted by the Nigerian Armed Forces.

READ ALSO  2023: Tinubu Must be Punished for Buhari's Lackluster Performance

He was later treated to a cultural performance by the Omenaimo Cultural Troupe from the Imo State Council of Arts and Culture.

The News Agency of Nigeria (NAN) recalls that the president was in the state in 2021, during which he inaugurated some of the governor’s projects.

2023: My Agenda for Nigeria if elected President – Ahmad Lawan