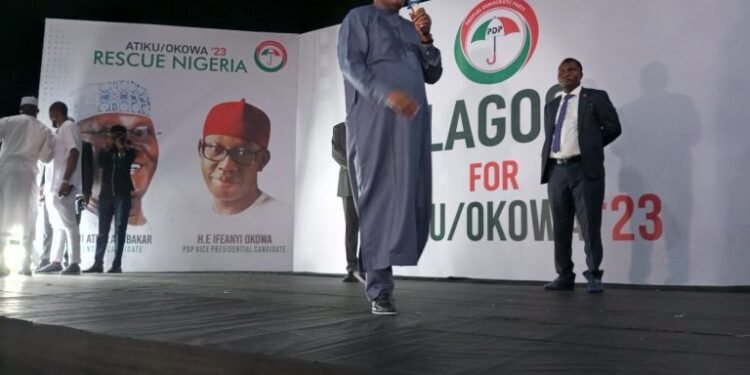 “Now, in all my political career, we are the people who established PDP,  I have never seen Lagos state so mobilised like this. This makes me believe that this electoral time, PDP is going to win Lagos.” – Atiku Abubakar

The PDP Presidential Candidate, Alhaji Atiku Abubakar  on Tuesday said he was  marvelled  by the level of mobilisation of party members  in Lagos State ahead of the  2023 general elections.

Abubakar, who arrived the state early in the day to attend  series of activities, spoke at a stakeholders’ meeting with party members, leaders and candidates for various positions in the forthcoming elections.

“Now, in all my political career, we are the people who established PDP,  I have never seen Lagos state so mobilised like this.

Abubakar, who promised to support the party to win the 2023 elections in the state, urged the party stakeholders to work harder to achieve the feat.

“Therefore, we are ready to support you to any level to make sure that you win Lagos state.  You know, when I say I am going to do something, bring the sky down, I will make sure I do it.

“Therefore, I want you to work harder, we will cooperate with you, we will support you and protect you to make sure that this time around, you win Lagos state,” he added.

The PDP standard bearer, who noted that campaign had not started, said he was in the state to see the situation of things in the party.

He said: “I have come to see for myself that PDP is on ground in Lagos state , and I have seen things for myself.

“That makes me believe that this time around ‘Jandor’ (PDP governorship candidate) is going to be the next governor of Lagos state. You will see what we are going to do when the campaigns start.”

He commended the party members for their support, patience and persistence.

In his remarks, Dr Olajide Adediran (Jandor)  the governorship candidate of PDP in Lagos state, said the people of the state had never been so hopeful with Abubakar.

Adediran said  the party members in the state had spoken to themselves and had decided to focus only on Abubakar as “the Project 2023.”

“We have spoken to ourselves and we have decided to say, regardless of whatever is happening anywhere, what is paramount to us is to deliver Nigeria and Lagos state for the PDP.

“We appreciate you, we believe in you, we cherish you. What we want is a president of the Federal Republic of Nigeria come 2023 and that is what we have in you. Our concern is the 2023 election.

“I want to appreciate you personally for believing this time that we are going to deliver Lagos state for the PDP,” he said.

The News Agency of Nigeria (NAN) reports that Abubakar was accompanied by former governor of Niger,  Babangida Aliyu, Sen. Dino Maleye, Chief Raymond Dokpesi, party stalwarts and some other members of the National Assembly from the party.

Members of the  Philip Aivoji-led Lagos state executive committee of the party were in attendance among other bigwigs of the party.

US Court Documents: Tinubu Must Come Clean or Quit, Obi-Datti Demands from APC