2023: Tinubu So Desperate — a leader who doesn’t mind being led, opinion by Ikeddy Isiguzo 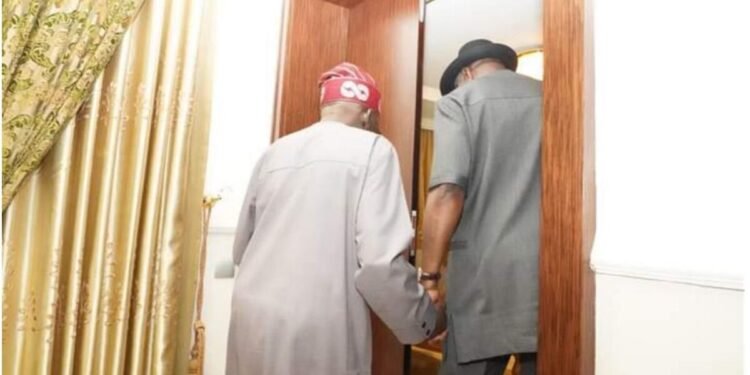 “A Tinubu presidency would create the position of a tender for the leader whose major function would be to lead the leader. He would make decisions on where the President goes. Many are already playing that role.” – Ikeddy Isiguzo

A picture of Bola Ahmed Tinubu, Jagaban Borgu, soliciting the support of Goodluck Jonathan, former President of Nigeria, is a more recent confirmation of Tinubu’s desperation to be president. Trust his media minders to spin the narratives as if Tinubu, not Jonathan, was the victim of the serial, caustic media attacks that birthed the regime of Muhammadu Buhari.

Nobody is mocking Tinubu’s undisclosed health status. He is frail, fragile. He is human though some elevated him to a god. Plaudits piled on him as strategic thinker, political juggernaut, and a breeder of leaders in the political spectrum, cannot redeem the fact that whatever he has been, he is now a leader being led.

Was there anything in the picture of Jonathan pulling a half-bent Tinubu around to suggest Tinubu can lead himself? What quality of decision can Tinubu make in this stage?

A Tinubu victory would mean a proxy president. Is that the agenda? Who is reducing the presidential race to a puppetry to accommodate Tinubu?

People making comparisons of Tinubu and Buhari know they are immeasurably unfair. Buhari was never led around in the run up to the 2015 election. Even if Buhari was in this state when he promised, “Nigeria, top to bottom”, should we reward the damage that the All Progressives Congress, APC, is doing to Nigeria with another “top to bottom” leader? Tinubu has promised to finish what Buhari started.

Tinubu’s supporters have imbibed his desperation. They defend whatever is raised against him. They praise his political proficiency for the emergence of Buhari as President. They are quick to absolve him of the fumbling and wobbling of Buhari as he holds no official position in government. That is how obtuse the matters get.

A Tinubu presidency would create the position of a tender for the leader whose major function would be to lead the leader. He would make decisions on where the President goes. Many are already playing that role.

READ ALSO  The Uncanny Challenges to Presidency for APC, PDP, By Magnus Onyibe

German political scientist Elisabeth Noelle-Neumann propounded the spiral of silence theory in 1974. According to the theory, individuals will be more confident and outward with their opinion when they notice that their personal opinion is shared throughout a group. But if the individual notices that their opinion is unpopular with the group they will be more inclined to be reserved and remain silent. In order not to be insolated, the individual would join the popular view (Wikipedia).

Tinubu’s supporters use this theory in pushing their narratives the most recent of which is that Tinubu developed Lagos, a 1472 Portuguese trade outpost, which the Portuguese named Lagos, which used to a Benin Empire vassal, was under British control, was a federal territory through the independence journey until 1967, and indigenously belongs to the Awori. Is Tinubu Awori? Does anyone know who he is?

Various media materials are abroad in different names praising Tinubu’s development of Lagos. They refer to the magic of his eight-year rulership of Lagos and quickly appropriate the works of his successors, only their successes. No mention at all of Alhaji Lateef Jakande whose four years of managing Lagos cannot be replicated by Tinubu in 24 years.

They also deploy salience of silence to de-escalate issues that hurt their support of the led leader.

When Kashim Shettima declared himself the Commander-in-Chief of the Armed Forces and head of the security agencies in the dream presidency of Tinubu they called it a gaffe. Even the offish manner Shettima explained that the Vice President would take over the constitutional office of the President leaves no doubt that there is more to the APC team than would ever be open.

Anyone who thinks Shettima gaffed is denying the forces moving the Tinubu agenda – concessions, in all forms so long as Tinubu’s life-long ambition, as the Jagaban states it, is realised.
Shettima may dress like a clown when he chooses but he is not one. With forages into banking before politics, why would his eyes not be on improving the economy? He chose power, security, control of the Armed Forces.

He had the effrontery of being the one to allocate assignments to his boss!

Shettima wants to be commander-in-chief as vice-president

Should someone with documented relations with Boko Haram be on a presidential ticket? The controversies around the ticket have steadily ignored his activities as Governor of Borno State with known sympathies for Boko Haram. Whatever qualities informed his choice as vice presidential candidate are at war with the real Shettima.

The dangers Shettima poses are multi- dimensional. Security is so important. Why does control of security appeal to him to the extent that the constitutional roles of the President should be reversed in his favour?

Speculations are that it could be one of the concessions the led leader made. The other is that Nigeria would be safe in Shettima’s hands since the led leader can hardly move a hand.

None of these is any relief. Tinubu media would not say anything about the aberration of Shettima’s ambition. The only thing is that Tinubu should be president because it is his turn to be president, according to the Abeokuta declaration.

Please imagine for a fleeting moment that Governor Ifeanyi Okowa said he would be Commander-in-Chief under an Atiku Abubakar presidency. The media would have been awash with all manners of condemnations. It would not be seen as a gaffe.

Neither Tinubu nor Shettima should be on any ticket. Since they insist they are worthy, it is for all people who see these things to talk now, and for voters to throw them out at the poll.

Isiguzo is a major commentator on minor issues