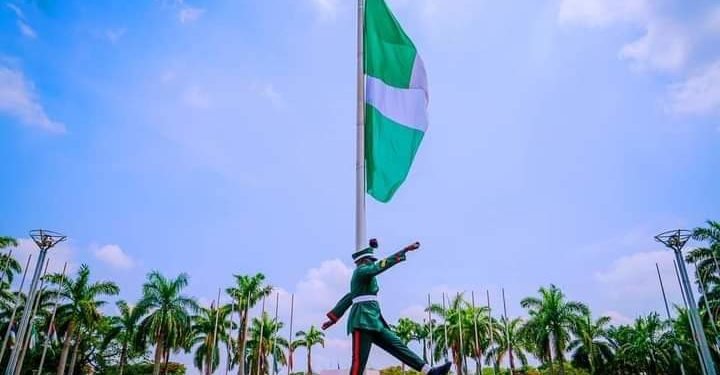 President Muhammadu Buhari has ordered that the Nigerian flag be lowered to half mast upon all public buildings and at all Nigerian Embassies, as a mark of respect for the late Queen Elizabeth II of England.

metrowatchxtra reports that the British longest-serving monarch passed away peacefully at Balmoral on Thursday, at age 96, after 70 years, seven months of reign on the throne.

Announcing the federal government’s decision, the Minister of Interior, Rauf Aregbesola, said pursuant to the President’s order and as a mark of respect, Nigerian flags would be flown at half-staff at all local and state buildings from Sunday 11th to Monday 12th September.

Minister Aregbesola also disclosed that the federal government would sign a condolence register on Saturday at the residence of the British High Commissioner in Abuja.

The statement reads, “In honour of Queen Elizabeth II. The Sovereign of the United Kingdom , chairman of the Commonwealth and an eminent global personality whose passage to eternity was announced on Thursday, September 8, 2022, the Ministry of Interior, on behalf of the Federal Republic of Nigeria declares that all flags in Nigeria and our missions abroad be flown at half-mast on Sunday , September 11 and Monday, September 12 respectively.

“Her Majesty Queen Elizabeth II passed away at the age of 96. Her 70-year reign was the longest of any monarch of the United Kingdom and encompassed over a quarter of the country’s existence. Throughout her time as Queen, she cultivated a friendship with the White House and met more United States and Nigerian presidents than any other head of state. Queen Elizabeth II will be remembered for her devotion to public service, commitment to duty, and her diligence to deepen the alliance between the United Kingdom and the Commonwealth nations.”

Going by the words of Labour Minister Senator Chris Ngige, only the National Industrial Court (NIC) can guide the Federal...