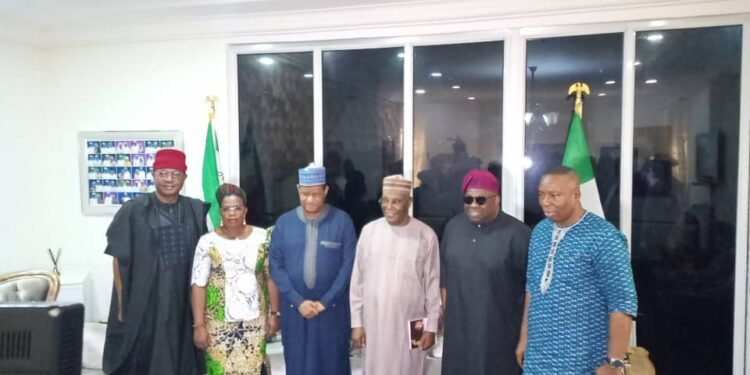 Governor Nyesom Wike of Rivers State was conspicuously absent on Wednesday when the presidential candidate of the Peoples Democratic Party met the 2023 ex-presidential aspirants of the party at his Asokoro residence in Abuja.

However, in attendance at the meeting include Dele Momodu, Mohammed Hayatu-Deen, Tari Oliver, and Charles Ugwu.

Atiku commended them for accepting the outcome of the convention that produced him as the PDP flag bearer, and for not raising the dust.

He promised to work with all of them ahead of the 2023 general elections, adding that they have various roles to play in his victory at the polls.

In his remarks, Gana said they were in Atiku’s house to congratulate him and to assure him of their support as well as a commitment toward ensuring that he wins Niger State.

Gana also disclosed that the ongoing reconciliation between Atiku and Wike is yielding success.

Channels Television reports that Wike hosted his ally, Governor Seyi Makinde of Oyo State, in Rivers where they commissioned the Emohua Campus of the Rivers State University in the Emohua Local Government Area of the state.

At the primary in May, Atiku polled 371 to defeat his closest rival, Wike, who polled 237 votes.

Following the outcome of the primary, Wike has been at loggerheads with Atiku over his choice of Governor Ifeanyi Okowa of Delta State as his running mate. Wike has also demanded the resignation of the party’s national chairman, Iyorchia Ayu, for a southern replacement.