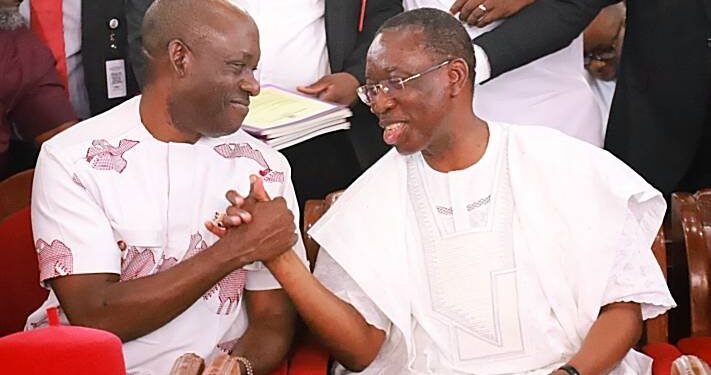 The governors made the call on Sunday at the 60th birth anniversary thanksgiving service of Archbishop of Awka Diocese of Church of Nigeria, Anglican Communion, Most Rev’d Alexander Ibezim, held at Cathedral Church of Saint Faith, Awka.

Okowa said that the South East was destroying its own economy with home-grown insecurity, including a sit-at-home ordered and enforced by non-state agents.

He called for deep soul-searching by all the actors, and urged them to unite and resolve the empasse.

He congratulated Governor Soludo for his efforts at tackling insecurity since assuming office and urged the people to support him to end the challenge which had impacted negatively on the economy of the State and region.

“I am glad that the people are supporting the governor because I can see a lot of changes and I believe it is well with our people because I know that the more we have sanity, the more the economy of the people of the South East will grow.

“We cannot afford to destroy our economy with our own hands, and may God not allow us destroy our own selves with our hands.” he stated.

Okowa said he was glad to honour the Archbishop’s invitation to the service, adding that with the security and economic crisis rocking the nation, it was difficult for people to feed.

“There is no doubt that in our nation, Nigeria, as it is today it is not easy to shepherd the people because the times are difficult and families are finding it difficult to eat.

“But, I know that the Archbishop is a very prayerful man and it is well with the people and the diocese.

“At a time like this, I always urge church leaders to continue to pray because the prayer of the righteous does more than the people think it does.

“As politicians, we also belong to the body of Christ and the more our people pray rather than despair, the more likely the nation will turn around because there is nothing God cannot do.

“And, we must allow God to lead us this time because mistakes have been made in the past but we do not want to make mistakes again.

“People are happy with you and they have come to celebrate with you but to me it is more work for you because it is time to pray more for the people and the country,” he said.

On his part, Soludo said it was a moment of rededication for the people of South East, adding that known and unknown gunmen had no place in Anambra.

“It is a moment of rededication for the South East to realise how Nigeria politics works because what we are looking for in Igbo land requires hardwork, dedication and building strategic alliances.

“I have said that for me, I will not celebrate until when we tackle insecurity to almost near zero, when all our schools work, when all our hospitals and roads are fixed then i will celebrate,” he declared.

He congratulated Archbishop Ibezim for 38 years of impactful life in the service of God, assuring that his administration would continue to work for the peace and development of the state.

“We will continue to work hard to rid Anambra off miscreants disturbing the peace of our state because known and unknown gunmen have no space in Anambra.

“I urge Christians to come together and work for the growth and development of the state and country through the spirit of Ecumenism.

“On behalf of the good people of Anambra, I welcome all of you from the nooks and crannies of Nigeria to Anambra State,” Soludo added.

Archbishop Metropolitan and Primate of All Nigeria (Anglican Communion), Most Rev’d Henry Ndukuba, in a sermon, said no matter what the country was facing, God had promised solution if the people can seek Him through faith.

He urged Nigerians to keep believing God with faith for a solution to the nation’s challenges, adding that “contentions and trials will surely come but God who kept us until now will keep us throughout these trying times,”

He described the celebrant as a humble, articulate and persevering priest who had contributed immensely to the growth and spiritual development of the Awka Diocese and beyond.

Chairman of the occasion, Senator Ben Obi, described Archbishop Ibezim as an undisputed prayer warrior whose spiritual contributions to the Awka Diocese and Province of the Niger was unparalleled.

The celebrant, Archbishop Ibezim, thanked the Primate and invited guests for honouring him, assuring that he would continue to dedicate his life to the service of God and humanity.

Ayu: Wike Being Clever by Half about Zoning — opinion by Markson Chiwekwu

"Indeed, Atiku Abubakar who also had an eye on the presidency was also agitating for the zoning to either the...

APC Cause of Poverty, Hunger in Nigeria, Says Okowa

Why Nigerian Youths, Students Are Rooting for Atiku/Okowa, By Okowa’s Aide